So, I was just awarded this: 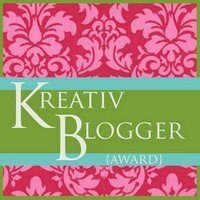 Given to me by Cromsblood of the CROM! blog. Cool -- last time I was ever nominated or received a web-based award I was still hanging around usenet, years before this blog even existed (or I even heard of blogging).
Like most things web-based, it's trying to go viral, so there's rules attached to this award:
(1) Thank the person that nominated me.
(2) Copy the award and put it on my blog.
(3) Link back to the blog that nominated me (CROM! ).
(4) Name seven things about myself other people might find interesting… listed below.
(5) Nominate seven other Kreativ Bloggers… also below.
(6) Leave a comment on their blogs so they know they’ve been nominated… get on that later today.
Seven Things people might find interesting about me. Hmm. Guessing my usual audience here, I'll try to come up with things that would be interesting to this group.
My seven nominees:
Dr. Sketchy's Toronto - wish I could get out there more often.
Ty Templeton's Art Land - free comics every weekend and lots of the funny
She's My Kind of Girl - needs to be updated more often!
Illustration Art - great pictures and good reading
The Labyrinth -- one of Canada's best bookstores
Gurney Journey -- James Gurney!
Mike Wieringo -- one of the best friends I've ever had. Still miss him whenever I finish something I think he'd like to see.
Off to leave the comments.
Some art goes up later today.
Posted by Unknown at 08:12

Congratulations on the award, and thank you very, very much for the mention! We miss you very much, but treasure the moments we have with you.