Spurred by finding a cache of old art the other day:
Many, many years ago in a distant land their existed a sleazy company that existed because it was chosen to be Image Comics' initial publishing partner. This role was so lucrative that they were able to reinvest into and relaunch their own comics publishing venture; Malibu Comics and the ULTRAVERSE! They hired many good and talented people to do this. Many of these people would create brand new characters they would hope to last and entertain well into the future decades.
That, obviously, didn't happen.
What did happen is what usually happens; most of it was forgettable retreads of established properties or ideas or ideas that only worked when their creators were the hands at the wheel. James Robinson's FIREARM, produced with various art-partners, was certainly a case of the latter.
Another was Barry Windsor-Smith's RUNE. The cosmic vampire's book was a beauty to behold when it came out, which wasn't particularly often. Nor was it much to read; it was really a bunch of ideas that appealed to BWS that didn't cohere into an easily understandable narrative. Then Barry quit.
Or was asked to leave.
Or something, because I was asked to draw a pin-up showing how I'd draw Rune: 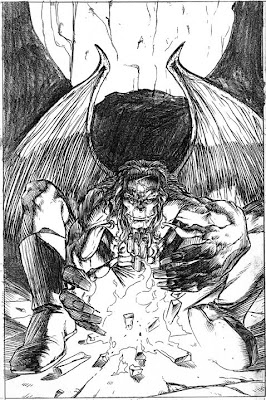 They then paid me to draw a couple of sample pages, which they stopped me from finishing by giving me the very next issue to draw and telling me I was the new regular artist on the book.
Now, I still loves me that BWS despite his preference toward drawing his comics women to look like butch transsexuals or 13-year old boys. His storytelling, page design and raw drawing ability is always a joy to look at. Not so much a fan of his non-comics work since he tends to fall to far down the too-busy-pre-Rapaelite rabbit hole for my tastes, but it's still recognizably work of a high caliber.
That being said, I have never wanted to be a BWS clone, nor did I think that BWS's thick and decorative line-work had a place in where I was going as an artist.
Malibu decided it did, but didn't tell me. 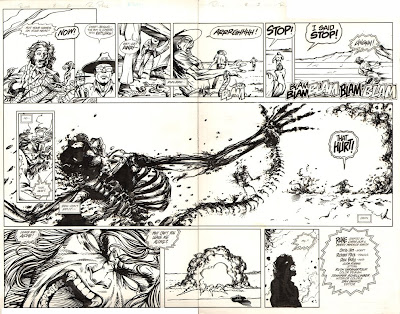 They assigned a guy from Barry's studio to ink me, Alex Bialy, and told him to make me look as much like Barry as possible.
I understood that a sudden break from Barry to anyone else would be jarring for the readers, so i actually tried to allow what Barry does into my work; I altered my layouts and rendered a little more loosely. This was hindered more than a little by Malibu's paper best described as a cardstock formed from recycled toilet paper. I knew then I had a lot to learn and many, many places I needed to improve in (still do), but I knew what direction I was moving in as an artist.
The combination of what I was capable of and what the inker was doing to the pages was far from anyone's best result. I let my editor know how dissatisfied I was. I only realized later what a shitty position my editor must have been in, but he set up a call between me and Alex.
That's one of the more memorable calls in my career. Now Alex really didn't have anything more to say than "this is how I ink and I was asked to do this to your work." The best part of the phone call would take place right after he said "Barry would like to talk to you."
I could hear the phone being handed over. I could hear breathing as the phone was placed to the man's ear and mouth. There was a pause -- a palpable pause, then he started to speak, "This. . ."
And then ANOTHER PAUSE! Really. Full on showmanship in a phone call. The pause was long enough for the full weight of Barry's ego to come oozing through the phone and into my studio. The pause was long enough for me to understand I was supposed to appreciate I was in the presence of rock star art world greatness.
". . .is Barry Windsor-Smith."

Yeah, he said his full name and I don't think I can really elaborate beyond that how much arrogance came with that. That's the point I realized how shitty a place my editor was in. he had to appease the great and powerful BWS while handling the move from a creator-directed company-co-owned book to a company-directed book while keeping the creator happy.
The rest of the phone call was pretty laughable. You might notice I keep using phone call instead of conversation here and that's intentional. I wasn't talking with Barry, I was talked to. Barry revealed some pretty weird ideas and goals for his studio that would include me only if I were the least bit inclined to think they were goals worth pursuing. It was pretty hard not to laugh at what he said a number of times during the call. He really had no clue what direction the industry was moving in. I let him talk himself out while trying to be respectful. Wished him well, said goodbye then called up my editor and quit.
I had a cover to draw still -- the sketch approved and ready to go: 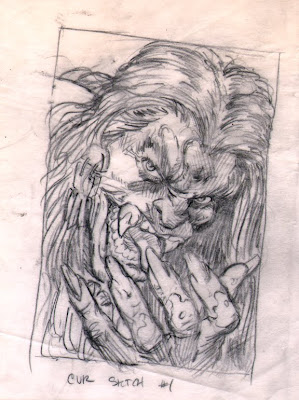 I really needed to get away from this, though. The idea behind the cover was that there was a new face to Rune and, if I was gone after this issue, the whole episode was pointless.
This is the cover they ran:

I actually think that cover's a better indication of how messed-up things were on the book.
So, I ended up with a pretty shitty work month back in 1995, but I got a great story out of it and learned a great deal.
Malibu was bought by Marvel, folded up and, eventually put away when Marvel realized Malibu didn't fully own the Ultraverse. All those characters, including RUNE, damned to the obscurity of being an also-ran company during the 90s boom.
I still really like Barry's work and hope he drawing well into the future.
Posted by Unknown at 13:07