So I attended my first Keyhole Session tonight.

Three one-minute gestures -- kinda bad for me as I usually need about 10 to get a feel for the paper I'm working on and getting the proportions to flow right.

I missed the model's name, but she was stunning and a fabulous model. 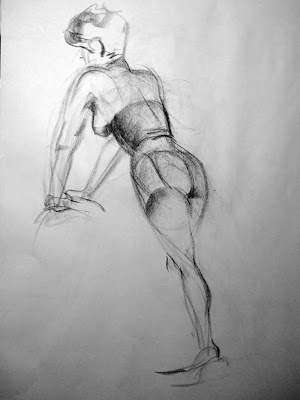 She was joined for a few poses by an additional model, which was certainly fun to draw. 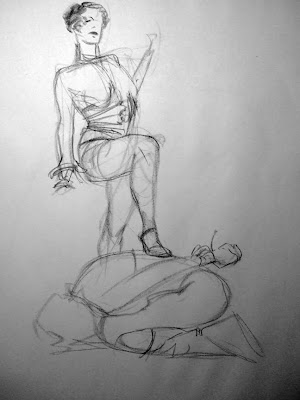 The models posed in front of a mirror -- I ignored it, but regret doing so now. Hopefully next time I'll incorporate some reflections. 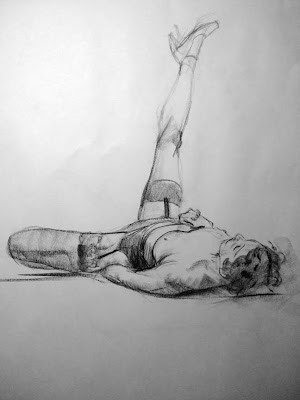 The proportion issues stuck with me all night -- I cropped off the legs on this piece as they were embarrasingly small. 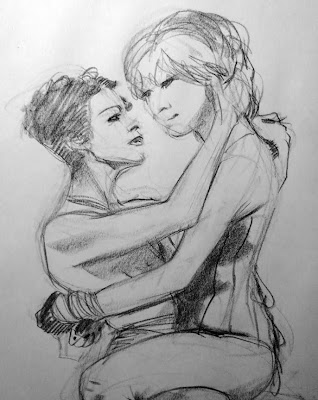 This was my favourite drawing and pose from the night - -wish I could have had another 5-10 minutes on it. 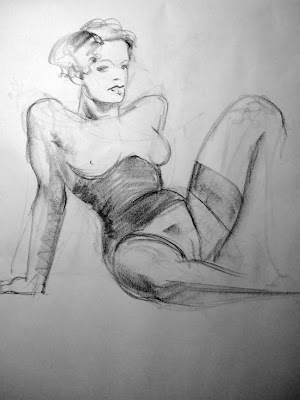 I really enjoyed the session and will repeat -- though I'll likely try to alternate this with Dr. Sketchy's; Keyhole is weekly while the good Doctor is bi-weekly. I had enough of commuting into Toronto when I was teaching, so two trips into the city in a week would start to wear after a while.
Posted by Unknown at 01:05 No comments:

Email ThisBlogThis!Share to TwitterShare to FacebookShare to Pinterest
Labels: The Keyhole Sessions

Monday night was Dr. Sketchy's Anti-Art School and the subject, in honour of the just ended Fanexpo here in Toronto, was Tank Girl.

Photographer Brynne Kennedy, dropped her camera and most of her clothes, wore a helmet and hefted toy guns to portray the titular (tee-hee) grrrrl. 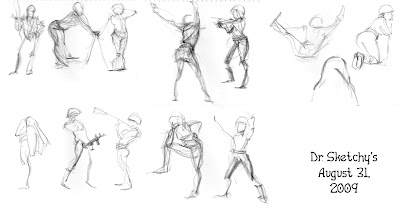 I'm sure every Dr. Sketchy regular has looked at Brynne's butt quite a bit -- usually while she's standing between you and the model, but this time we were supposed to stare at it. 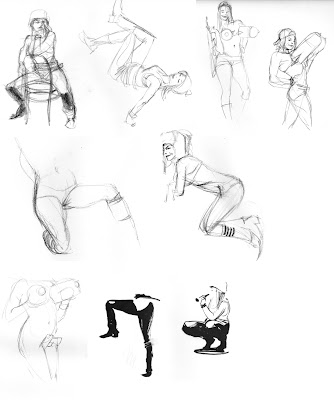 Liked playing with the Pentel brush for the two little doodles at the bottom there.

There were the usual challenges. The first was to incorporate one of Tank Girl's kangaroo lovers. I didn't have any idea what to draw until the last minute. I won, but I think it was a victory of punch-line over drawing. 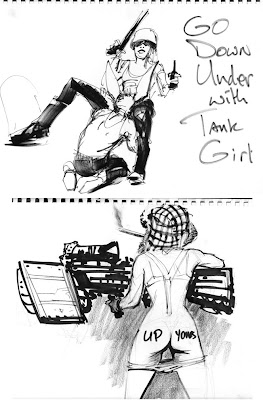 The second challenge was to give Tank Girl a Rob Liefeld-style gun. Brynne had actually written "Up yours" on her cheeks, in the actual pose she teased down her "shorts" to reveal that. I didn't really want her holding a giant Liefeld gun in her ass, so I changed it up a bit.

The last drawing was more inspired by the costume than her pose -- Brynne took a Flashdance-style pose stretched across a chair, but I really wanted her to take this sort of pose. 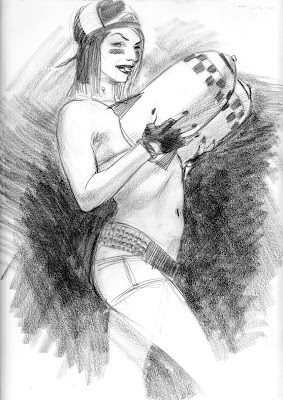 Brynne was such a great sport she actually took one extra pose like that after we were supposed to be done -- the drawing next to the ink sketches above was all I managed to do before time ran out. I was pacing myself for 10 minutes even though I knew it was a 5-minute pose.

As always, Sketchy's was a blast and a half. It was packed last night and I think Brett had to turn people away -- thus earning his nickname as "The Despot"! It's two of my fave models in two weeks, so I'm gonna show early.