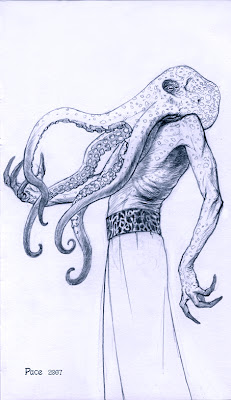 Wanted to do something more horror-oriented, which I did, but I ended up too busy to get to put it up until now. I had to make a choice between a commission I finished last week and this, decided I'd rather start off March with a more polished bit of art than finish of February with it, even though the other was done first ( it's more obviously a fantasy-thing, which also pushed this ahead, since, like I said, I wanted something more horror-oriented).
It's a Mind-Flayer, also called an Illithid, I've called 'em squid-heads -- they're a Dungeons and Dragons critter that enjoys a diet of brains!
Really, what's not to love?
Yah, I know that brings it back to fantasy, but the 'flayers are so obviously a tip of the hat to Lovecraft and the popular image of Cthulhu that it really counts as a horror image.
Well, at least I think it does.
More tomorrow!
~Richard
Posted by Unknown at 22:35 2 comments: 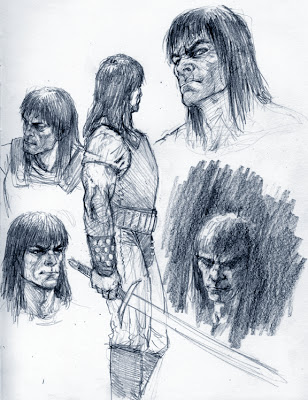 I've been warming up to draw something nice with Conan here. . . sometime soon. In the meantime I've been doing some sketchbook doodles along the way, trying to capture the guy at various ages.
Frazetta's first painting of Conan set the look of the character for me for all time. Barry Smith's was too effeminate, Big John Buscema's looked a little too much like an ape unless he got strong inking. Neal Adams' was great (and the time he inked Big John was amazing) and I like Cary Nord's take of the character.
Later,
~Richard
Posted by Unknown at 00:08 2 comments: 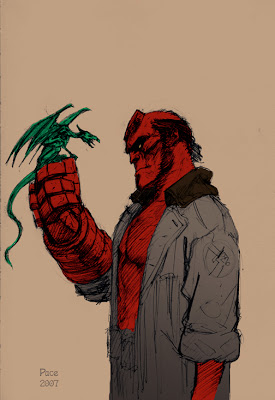 I got the new Hellboy animated DVD this past week; Sword of Storms. Loved every second of it.
Of course, I've loved Hellboy since it first showed up wayyyy back when Legends started up. I've always been a fan of how Mike Mignola draws, even though it's so different from how I approach it. His work is essentially page design as theatre -- he doesn't do perspective, really, and he's boiled down his work to a form of shorthand hieroglyphics that are a wonder to see.
He's also a helluva great guy.
I layed flat colour over the sketch, and decided to not render or model it at all as a tip of the hat to the beautiful flat colour Dave Stewart applies to Hellboy.
. . . . .
Man, I really want to back in there -- local colour drives me nuts!

Later,
~Richard
Posted by Unknown at 00:21 No comments:

Queen of the Black Coast 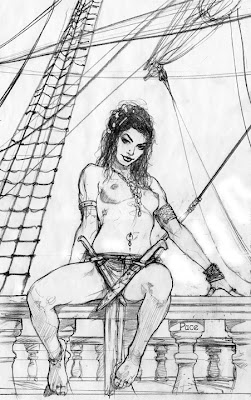 Ever have a relationship with someone who was wilder and more sensual than anyone else, pushed you further into dangerous places you may have wanted to go, but not so recklessly?

This girl was something else; she was a Shemitish (read historical Hebrew in Howard's Hyborian analog) captain a pirate vessel manned entirely by blacks native to the jungles of the Southwestern coast near evil, snake worshipping Stygia. Her raid upon a merchant ship ended up with everyone but Conan (an accidental passenger) from the merchant ship dead, many of Belit's crew dead by Conan's hand, and the the Pirate-queen throwing herself at Conan in a bizarre post-battle heat.

Of course, Conan decided this was the woman of his dreams.

It's ends badly, of course, as all literary crazy people relationships usually do, but it was a hell of a ride!
~~~~~~~~~~
Artwise, this was fun -- as with any essentially unplanned sketching, I dropped some elements in the composition that I would change -- primarily the placement of the rigging and the horizon, but it's just a sketch, so it's something I would address if I were going to make a finished piece of it. Probably find a way to include some of her crew. I'd also do something with the sky -- some white big clouds rising out of the seascape.
~~~~~~~~~~
Health-update: finishing another course of antibiotics for my bronchitis, and I've started rehabbing the right knee. Yogi, my physical therapist, tells me the patella has moved horizontally across the knee and is now grinding away everytime I bend it. Yay!
~~~~~~~~~~
Hip deep in other work; freelance work as always, finishing the write-up for my Design and Composition class at Max the Matt in advance of our field trip to see Pan's Labyrinth, and finishing my notes for the first few classes of my Beasts, Hulks and Things: Drawing Monsters of all Shapes and Sizes course starting on the 28th. I might start dropping some of that material here and blogging about that course for a bit, but I do want to do a few more Howard characters (including a certain Cimmerian) soon.

Take care,
~Richard
Posted by Unknown at 01:56 No comments:

By My Lungs, Betrayed!!! 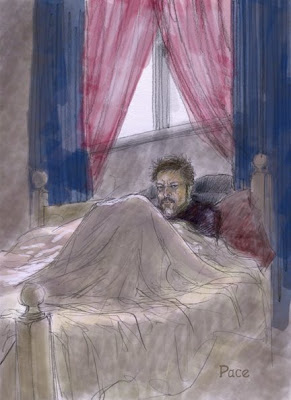 Yeah -- this is the other thing that hit me in January; Bronchitis.

I've had it before, so it shouldn't have been a big deal to deal with it yet again. I've heard that once you get bronchitis, you're prone to get it again, so I'm resigned to this happen every year or two, but this last bout really took me down hard.

At first I thought I was just getting a cold on top of my messed-up leg. I had to cancel the Monday night course I teach, but I did trek in to Toronto to run the morning Life Drawing class: limping and coughing while going over Hale and Bridgman. I figured I'd be right as rain come Wednesday after collapsing into bed for a full day on Tuesday.

Nope. I was much, much worse.

I'm feeling mostly recovered over ten days later. Considering it usually only dragged me down for a few days in the past, this was a nightmare for me. I guess I'm getting too old to just to expect to shrug everything off.

Something genre-related in my next post - -promise! I'm sure two goofy self-portraits is more than enough for anyone to look at.

~Richard
Posted by Unknown at 02:31 No comments: 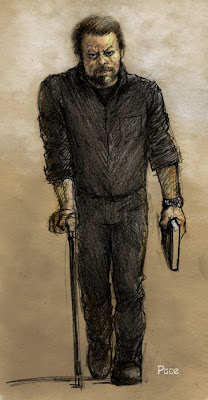 I've not had the best January of my life. The eight entries had more to do with health problems than laziness. Two major things started up last month -- this post will deal with the first.

Over three weeks ago I was walking my dog -- it was icy out, but not too icy; the treads on my shoes were up to the task of walking through the park and back. Easy-peasy.

So, I was watching my aged pooch gambole about the park when my right foot did a 80-degree turn of its volition. Nothing major there, but that the bones of my lower leg decided to go along for the ride. My knee made a strange sound - -like someone popping and ripping bubble-wrap at the same time. Nice.

I hobbled back home, thinking it was yet another knee sprain of some sort -- they've been common from the days I used to play football -- and that I'd have to be off it for a few days.

Well, it's still not healed over 20 days later. At one point I actually had to use one of my late Pepere's canes to get around at the art school. No fun trying to painfully hobble around an array of easels and students while trying to help them with their life drawing. I felt miserable -- I made a few grumpy Doctor House jokes on the day -- but I hope I wasn't too unpleasant to be around

I have seen my doctor and did visit one joke of sports medicine facility. I'm trying out another, well-recommended sports med center this Tuesday, so I'm hopeful. I'm also still icing the damn thing.
I'm just getting over the other thing - -but I'll go on about that next entry.
~Richard
Posted by Unknown at 22:56 No comments: