Had a particularly miserable week. Most of it spent relearning how to draw horses and attempting to design characters. None of the character designs were worth a damn so I've a pile of garbage instead of anything to show a client.
Sigh.
Anyway -- here's a few of the horse and rider sketches I did this week: 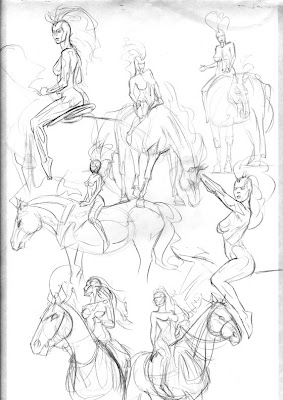 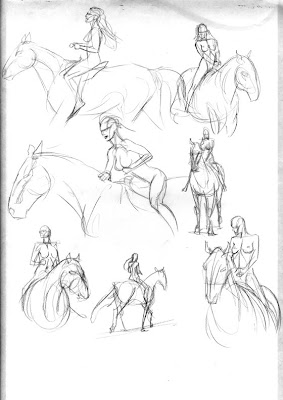 I might be able to use a couple of these for something. . .
Dunno -- I hope March is a better month for me
Posted by Unknown at 23:24 2 comments:

I've been meaning to try out a colour scan on my Mustek. I've been told repeatedly that these cheap 11x17" scanners can't handle colour. I did luck out and get the second generation model with more features -- so from the pile of old work came this: 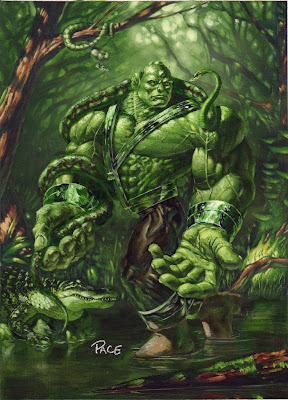 This was for the one and only Pitt trading card set. Painted in acrylics (gah!) and while I was a much crappier painter. I actually impressed myself at the time, which isn't saying much. This was, maybe 6 years out of college, I only had the one year of actual painting instruction that was worth a shit and I hadn't even started trying to teach myself any the stuff I suspected I didn't know.
I'm still trying to learn. Though, I think I have a better understanding of how much I don't know than when I was in my 20s.
***
Hmm -- this month has been rather hellish. All sorts of things have dropped of my schedule and one of my dogs dying is only partially to blame. I'm hoping March is better all 'round.
Posted by Unknown at 21:50 1 comment:

Email ThisBlogThis!Share to TwitterShare to FacebookShare to Pinterest
Labels: Pitt

Been a little strange this week. My dog Famké passed away last weekend. She was 14 and her hearing, eyesight and strength were starting to go and she was on two heavy strength pain relievers, but I was (and am) pretty crushed by her passing. Luckily my wife and son were away for the long weekend, so they didn't have to deal with any of it.
Anyway -- I've not done any drawing I can share so I've decided to did into that pile of hidden gems (?!) again.

This must be from some game art assignment that ended prematurely. I quite like this, actually -- given free time I might return to this and paint it. 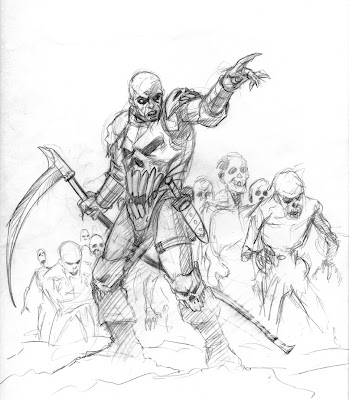 From the same assignment -- the death knight (who looks like Bendis here) on some sort of vampiric horse. 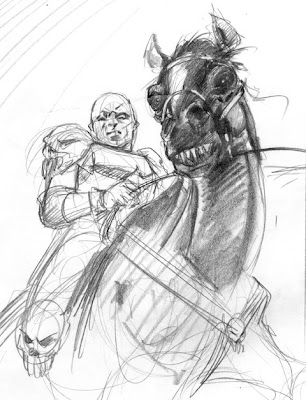 I did a quick cover for a Robert E. Howard magazine some time ago -- the writing was quite excellent. 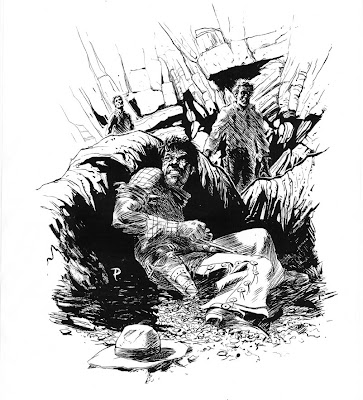 It would have been easy to draw some sword wielding barbarian, but cowboys and zombies has a Howard flavour to it, too.

More stuff from the pile of old work. Since it's Friday the 13th, I figure I can discuss some cursed horror projects.

In the early-to-mid 90s Vampirella made something of a comeback in regular comics. At a New York convention I met Harris Comics's editor in chief, Melony Crawford Chadwick and pitched her an off-the-top-of-my-head idea: cyborg vampires from the future vs Vampirella. There was more to it than that, but that was all just details. It was an immediately green lit and I started writing it and it became something I was really proud of; it was certainly smarter than I thought it would be and I made up some really weird bad ass shit that would have been an absolute blast to draw; I had one scene where one of those cyborg vampires was speeding down a busy NY street on a hoverbike against traffic smashing Vampi into the windshields of the cars as he passed by. 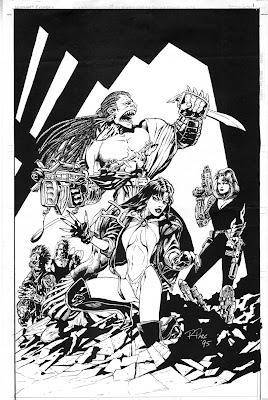 The decision was made that there should be some sort of "zero" issue to help promote it. I figured I could play with a time stream cop character I created for the mini, a shark-toothed, dread-locked alien I named Bleak. I had just finished my one issue of Malibu's Rune and had a lot of that character in my head and hands, which explains the similarity of a few superficial elements (big mouth & weird jewelry), but I really dug the boots I designed for him. 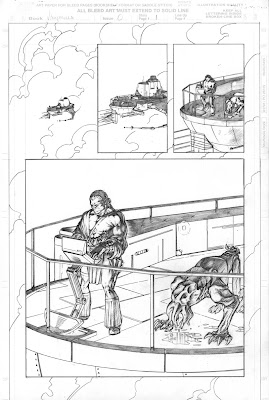 So, here's Bleak and his Cthulhoid dog monitoring "Shimmerspace" -- I concocted an alternate dimension cloudscape that somehow was a nexus for all timelines and could be used to track disturbances in those timelines. 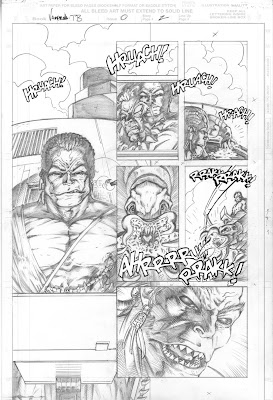 Dunno why, but I felt that the dog wouldn't really like Shimmerspace and had it throwing up on the deck of Bleak's ship. The weird monocled face on the screen in the second panel was the new incarnation of The Rook -- a recently revamped character and a time-traveller of sorts in the Harris Comics line. The idea being that Bleak was tracking someone in the "present" of the comics universe. 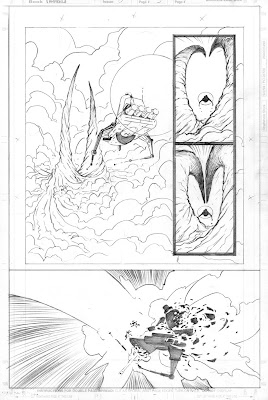 The two reverse tornadoes rising up and converging on Bleak were to indicate two alternate time lines being messed with by the events about to transpire in the upcoming mini-series.

Sadly, while starting to draw the next two pages, a double spread, I got the call that Crawford Chadwick was fired and all unsolicited books were on hold, which really meant they were cancelled.
The genesis for the cyborg vampires from the future came from another dead project. I had pitched the idea to the then editor of Blade as a fill in; the future these vampires came from was a radioactive hell so they had to travel back in time to obtain the uncontaminated blood they needed to survive. I managed to write the script before the series was cancelled. The last issue was the one my story was schedule to run, so I understood when the editor chose to give it to the main creative team.
Posted by Unknown at 06:03 1 comment:

Wow -- another one from the vault. This was the intended cover for New Warriors #54. Fabian intended to tell a story revealing how Speedball was practically the most powerful character in the Marvel universe. I was looking forward to it, but Fabian decided it was time to wrap his run on NW and this story was replaced by two fill-ins by a Marvel editor who had long lobbied to take over the book. His first story, which I really feel was trivializing a then current event in Africa and how certain I was that I was, at best, a poor fit for the direction of the book. Once the writer was given the ongoing gig, that was my cue to leave. 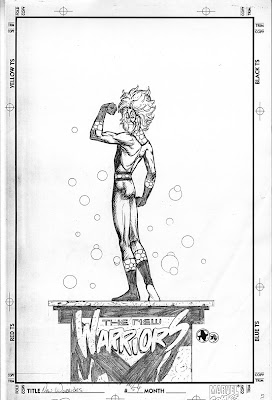 I actually remembered this being better than it is -- possibly because the office's feedback was so positive. I really made a mess of the anatomy and terribly over-rendered the figure. I still like the idea and composition, but that's about it.
I'm tempted to redo it as Penance, Speedball's current incarnation. . . .
Posted by Unknown at 13:34 No comments: 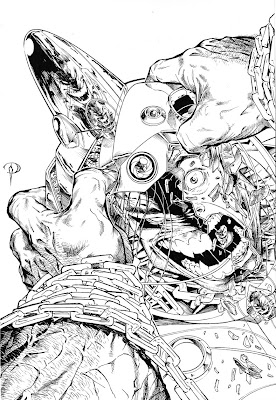 Another oldie -- I did this as a piece for the Pitt one-shot I wrote and drew back in 199X. Dale liked it so much he redid it as the cover, which was flattering as hell!
I drew this oversized so the sides are missing from the photocopy I've scanned. I've no idea if I sold it or misplaced it in my studio somewhere.
Posted by Unknown at 16:55 2 comments:

Email ThisBlogThis!Share to TwitterShare to FacebookShare to Pinterest
Labels: Pitt 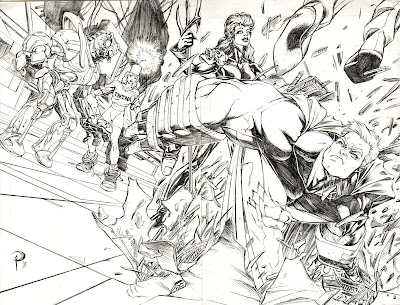 Years ago Rob Liefeld managed to get Alan Moore writing a few of his books, one of them being Supreme, Rob's Superman clone. I found myself saying nice things to Rob and Jeph Loeb at their Awesome Comics booth (it was the name of their company, their booth was actually pretty average) and they found themselves asking me to draw a pin-up. It was a blast to draw, and they paid really quickly (despite what I was told to expect by some other freelancers). The three characters in the pic with Supreme were (left to right) CaterKiller, TNTnA, and Demon Alisa. The boots flying out of the panel don't really qualify as a character

De-Mona-Lisa, get it? Yeah, they were lame, but fun.

A while later I was asked to write a mini-series for them, which would have also been a blast, but I was also working for someone they were being sued by at the time so it didn't work out.

Anyway - -the new drawing exercise will be a little late this week, I'm playing catch-up after a week of bad health. Probably Tuesday.