Earlier this week I got the script for my part of Worlds of Something & Something #3 (from Devil's Due). James Lowder did an excellent job adapting his own short story.
Was chomping at the bit to get my school commitments this week met to start on this (and continue work on my contrib to the Tori Amos project, which I'm not allowed to show any of the work). Did a few a few sketches of the Big Bad of the Something setting himself: Lord Something. 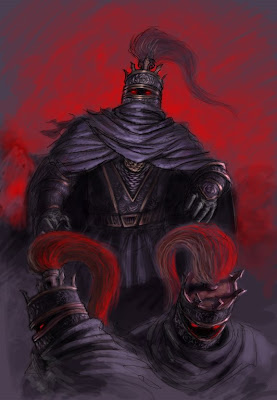 I'm not colouring this, but with all the digital painting I've been doing for the other thing, it felt odd not adding a splash to the pencil sketches in my book.
~R
Been asked by the publisher to remove references to the IP as it might interfere with their license -- thus the "somethings".
Posted by Unknown at 23:46 No comments:

Email ThisBlogThis!Share to TwitterShare to FacebookShare to Pinterest
Labels: Devil's Due, Lord Something So, this is why I did the Spider-Man drawing the other day.
The text I wrote on the jpegs is pretty explanatory of what's going on and touches on some of the stuff I'll be teaching and demonstrating this summer.
~Richard
Posted by Unknown at 23:33 No comments:

Have to do some work showing some developmental stuff for a course I'm teaching this summer on figure drawing without a model. Decided to use Spider-Man. Here's just two of the steps I go through when I'm drawing: 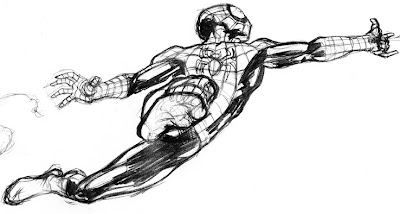 By the stage above I've already done a few thimbnails and had some false starts with portions of the anatomy. I draw on bond paper most of the time: it's translucent so I can trace and redraw whatever I need without a light table or flip the daring and hold it up to the light to reverse it so i can catch errors. About 60% of the work I do is on bond before being scanned into the computer or transferred to art board of some flavour.

I did another overlay drawing of the above before I drew the version below: 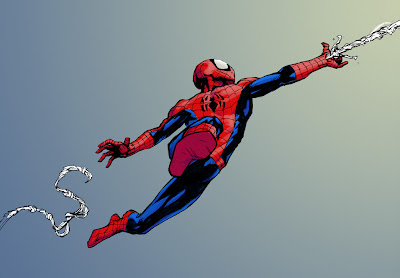 Normally I would have gone to Bristol to tighten the drawing up, but this isn't for publication, so I just tightened it up on a new sheet of bond paper before scanning and colouring

It was a nice break from rendering New York City brownstones.
Posted by Unknown at 01:28 No comments:

Email ThisBlogThis!Share to TwitterShare to FacebookShare to Pinterest
Labels: spider-man 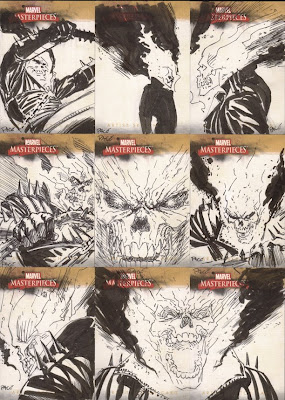 Working on a new batch of Marvel Sketch Cards for Marvel Masterpieces II (I think it's second set -- can't recall). Might play with these further at a later date. Might use some markers to add grey tones or some colour -- not sure yet.

Instead of 50, I opted to go for 100 this time. They make great warm-ups before starting the drawing day or for winding down.

With 100 cards to do I've decided to be a bit systemic: I'm going to draw eleven Marvel characters eight times over nine cards with one last single card to get one character drawn once. No idea who that'll be.

Pretty sure the next ten will be: 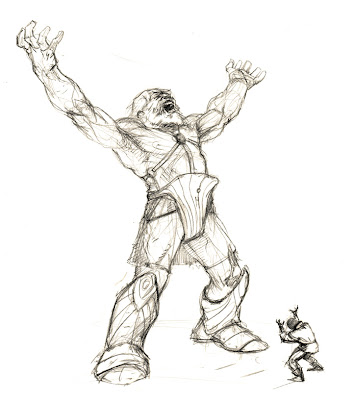 Wow -- fast month!
Lotsa things going on; six weeks left of school obligations left for this semester, the Tori Amos story needs drawing and painting, I got a 20 page story pending for an upcoming fantasy anthology series (not sure if I can talk about details on that yet) and I'm trying to line up my summer schedule as soon as possible.
I also did some virtual house cleaning; my website-I-never-did-anything-with came up for renewal and I passed on it since I really couldn't see a point where I'd have the time to set it up the way I wanted it to look and function, inspired by that I deleted my myspace account since it was a barely functioning annoyance more often than not. Facebook is doing what I wanted from Myspace, so I'll stick with that. I almost dropped Comicspace as well, but I'll see what the announced relaunch of that social network offers first.
Other than that, I've been chipping away on two projects; one a long gestating fantasy piece and a more recently started historical project. The giant above is from the former, of course. Giants are to be a big part of the fantasy "thing", so they require a great deal of of my attention as it develops. I'm starting to get comfortable with my conceptualization of my giants; longer than human proportion arms, much thicker legs and hips, cruder and different head shapes and their approach to armour.
Giants expecting to fight humans only armour their lower body, possibly wear vambraces and gauntlets and use shields if they were expecting missile fire. I imagine the crotch/belly armour I designed would be uncomfortable.
The historical thing would be a stand-alone graphic novel project, while the fantasy thing already has an intro one-shot (Zero-issue, I guess), a 6-issue mini series and several story points developed. I'm nervous about starting something that may wind up being so all-consuming, which is possibly why I'm doing so much development work on it and avoiding finishing pages!
Posted by Unknown at 00:07 1 comment: