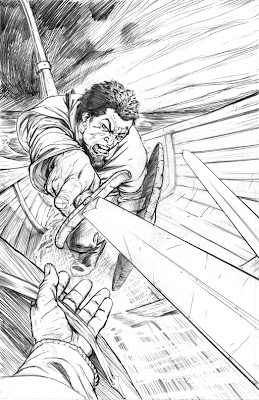 I've been obsessing over the first issue of Northlanders from Vertigo. This Viking comic has all savagery and three times the wit you'd expect of a Norse tale. It feels like some of Robert E. Howard's historical fiction, but with a more modern slant on the dialogue. You know what, I think it's essentially crime pulp set in the Viking era.
Brian Wood and Davide Gianfelice really outdid themselves here. Pick this book up!
It inspired me to to the drawing up there -- it's screaming at me to colour it. If I have the time, I will.
Posted by Unknown at 00:00 5 comments: 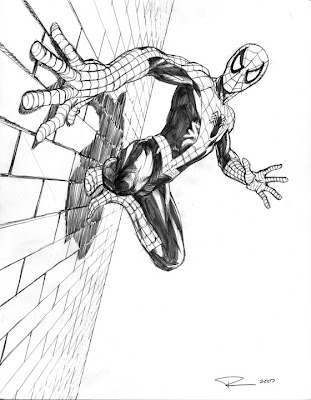 I don't think I've ever drawn Spider-Man outside of convention sketches before -- those are so chaotic and rushed I'm usually more worried about getting the costume right and making a drawing that won't get me a sad fan face in response that I don't get to think about what I'm drawing.
Drawing this I kept thinking about how much a genius Ditko is. Just the treatment of the fingers alone is brilliant costume design, but the mask and way the red sections wrap the form make for truly interesting shapes.
I always thought of this costume as annoying before really getting a chance to sit and take a few hours on it, but I actually enjoyed it.
Posted by Unknown at 00:42 No comments:

Email ThisBlogThis!Share to TwitterShare to FacebookShare to Pinterest
Labels: spider-man 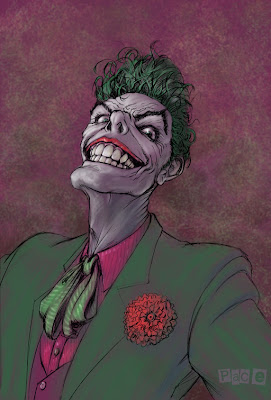 Drew the above while my students were doing the assigned work in the last class of Comic Book Layout and Composition for this semester.
You could say I like drawing The Joker.
You could also say that a Joker project would be a dream gig at DC.
Posted by Unknown at 19:51 No comments:

Email ThisBlogThis!Share to TwitterShare to FacebookShare to Pinterest
Labels: The Joker

The Fall semester is over.
I thought I was ready for how hard the 5-days-a-week teaching schedule was going to be, which I was, but what caught me by surprise was how heavy the administrative and student adviser aspects were going to be upon taking the Director of Illustration for Sequential Arts role. It'll be much easier next semester as my schedule drops to 3 days a week. It'll also be easier next year when I really will be ready for the load.
I should note that Ty Templeton made my job a hell of a lot easier by how much experience he brought to the table and how he essentially overtaught his class.
Hmm, I'm thinking that Director of Narrative Illustration is a more appropriate title since I'm also overseeing book illustration and the courses overlapping into Concept Art.
Anyhow -- I was kinda expecting to be working on some sort of fill-in over the break, but that seems to have fallen into corporate scheduling cracks. I'll be able to fill the time with a number of things anyway: Last Man Standing over at ConceptArt.org, a nice 7 page story for a big top secret anthology coming out next summer, house projects and developing course materials for next semester.
Enough about me. Here's some doodles: 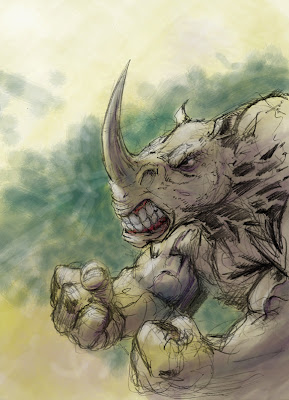 It's a rhino of some sort -- some students started dropping the name of some TMNT character upon seeing it. 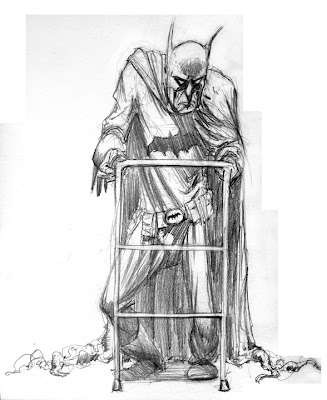 The students were concocting some sort of Batman thing, each taking turns drawing an old, emaciated Dark Night Decrepit (heh). They asked me to do this one -- apparently mine's not old or zombified enough.
It does look like how I feel today, though. I seem to have caught a cold from another commuter on the trip home from Toronto Friday night.
*cough*
*cough*
Posted by Unknown at 10:33 No comments:

School has really been beating me up art-wise. Lots of quick gesture drawing and what amounts to doodles. Nothing as finished as I usually like to post here.
This is from the most recent Dr. Sketchy's: 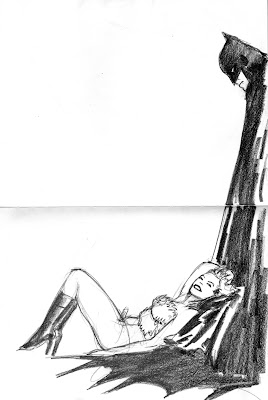 The model, Priscilla Pussycat, was a blast. Dressed as Poison Ivy, we were asked to hide Batman somewhere in the picture for the prize of a mystery drink. Audience voting won me the quadruple crantini. Yay.

Other super-hero-ey drawings include a few things like these: 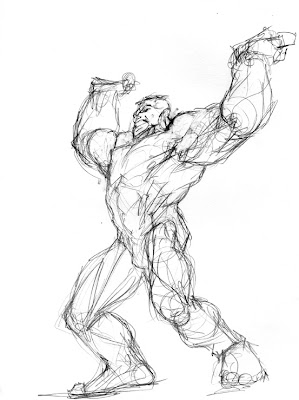 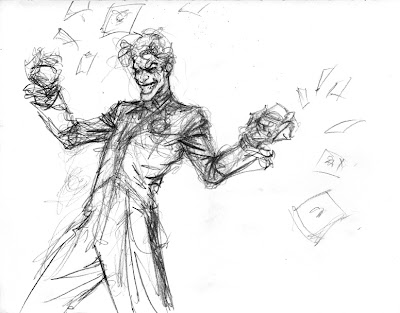