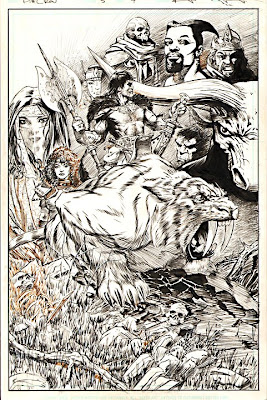 I thought I sold this ages ago, but it was in the cache of art I found the other week. If I've shared this previously it was a scan of a photocopy. Here you can see the red shift of some marker I used.
Grrrrr! I learned my lesson in the 90s to never use fugitive materials, so stuff like this wouldn't happen. I had bought some markers labeled "permanent pigment markers" in an art store in Ottawa or Montreal. Never saw the brand before, there was no odor and they drew lovely lines on the test paper in the store, so I assumed they were a competitor to Sakura Pigmas or other such non-fade markers on the market.
I recall inking this page with everything, brush, nib and Pigmas. At some point I grabbed one of the new markers and did a little work. The marker flowed fine and I ended up using them on a few other pages. Ugh.
Anyways - -I wrote and drew this issue of Pitt Crew -- the final issue of the series. I used it as an excuse to riff on Conan (with a splash of Kull).
Posted by Unknown at 15:35