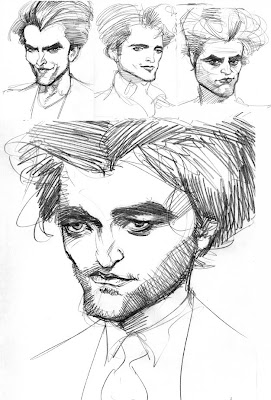 Yeah. . .
I was waiting for two of my favourite shows to come on tonight. One's about a guy with a really large penis and his life issues and the other is about really pretty guys in Hollywood, hanging out together and doing guy things so I figured I should draw something really, really masculine in case, y'know, someone gets the wrong idea.
Decided something Star Wars-y would fit the bill and put the question on my Facebook status and waited. For a while. Got bored and started channel surfing and I saw something about TWILIGHT and realised these actors have incredibly draw-able faces. So I decided to do a few drawings of young master Rob.
As soon as I started I realised it's been ages since I even tried to caricature anyone. So I drew a few of them.
This guy was made for genre films; outside of retired MMA fighters I've never seen a nose that broken and his hair defies logic and gravity.
I see that I was finally asked to draw something from Star Wars -- an AT-ST! I was kinda hoping for Leia in a slave costume or even C3PO in one, but a chicken-walker?
But I was asked, so I will oblige -- tomorrow night since my manly-man shows are starting!
Posted by Unknown at 22:11

Seriously great. I don't know that this kid will ever be a good actor, but what a great face!

Thanks, Ty -- means a great deal coming from you.

About his face -- I know! I actually caught part of Twilight by accident and I couldn't get over the faces on these kids. They almost look like Daumier drawings come to life. If I can find the time I'm gonna try and get all of them down.