Decided to try and squeeze in a piece of artwork to make a print for this weekend's Fan Appreciation Event in Toronto: 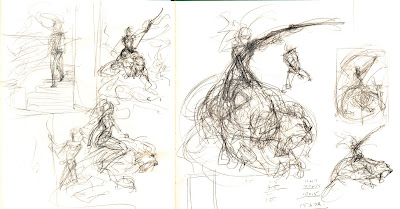 Yesterday I did a bunch of thumbs after I developed an inkling of what I wanted to draw. I've been itching to do something Frazetta-inspired since his passing. I didn't want to just draw or redraw one of his classic pieces, so I focussed on the things that really said "Frazetta" to me. Despite his amazing male figures, it has always been his women and big cats that made the biggest impression on me. So, some sexy amazon astride a giant lion/tiger-type -- perhaps even a sabertooth in some dark jungle ruins is what my brain spat out after ruminating while chugging away on an elliptical machine in my gym. 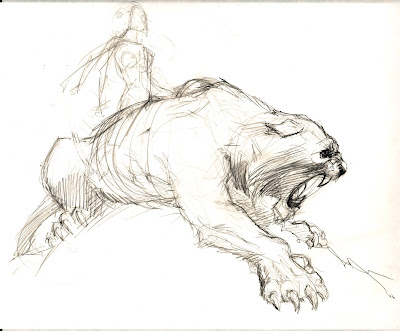 I really like drawing parts of a piece at a size comfortable to draw that part at. Working on 14x17"bond, the above cat is about 12" wide. It's been a while since I drew something like this, so I pulled out my various How To - books to make sure I was getting the forms right. There was no way I was going to draw the jungle girl that size and get anything I could be happy with, so I merely placed in a scribbly manikin for gesture and position so I would have a good feel for how I'd position the girl. 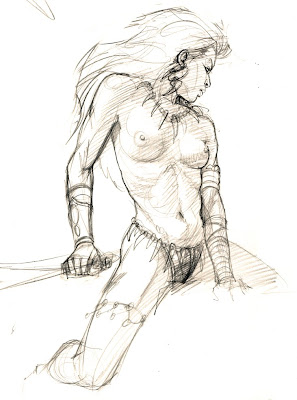 The above drawing is around 14"tall -- so it's even larger than the cat above despite how small she's going to be in the final piece. Working this large allows me to draw with my arm instead of my wrist which, hopefully, allows the figure to look more fluid. The details that show large here, will largely disappear in the final, but the suggestion of the necklace and other ornamentation will work better if I can place it accurately on the form -- something that's easier to do at a larger size.
here's how they look merged together: 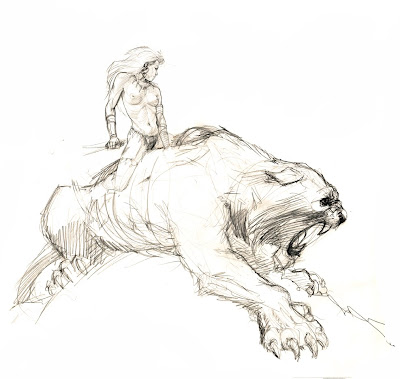 I have an image in my mind of how the rest of the composition works out, but that's something I'll actually do when I start painting in photoshop later today.
Posted by Unknown at 13:41

Love the process. I bet this piece is going to be amazing.