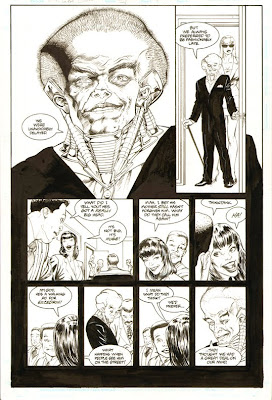 Introducing the first comics villain I created, Thinktank.
The Hulk had The Leader, so I thought that Pitt had something similar -- so I concocted this guy with a massive head. Inspired by the description of in utero cannibalism in Stephen King's THE DARK HALF I cooked up a case of triplets essentially merging into one infant with all three brains intact while in the womb.
Gross, eh?
I got to kill Thinktank (as much as you can kill any comics character) in the last issue of Pitt I wrote -- the eventual gag was going to be Thinktank's brains would each be popped into one of three creatures developed from Pitt's genetic material. A trio of near-genius minds running around in super-strong, regenerating monsters. That would have been fun to write.
Posted by Unknown at 09:28

hah! this is awesome