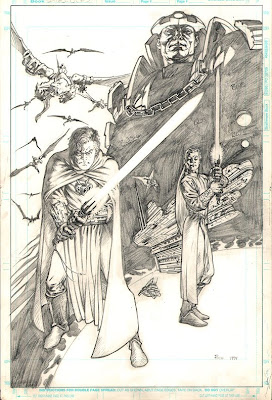 I think I drew this late in 1994. A good friend was working with an agency specializing in representing comics artists and I thought I'd give 'em a try. At one point they called and told me Dark Horse was interested in my work and wanted to see me try my hand on a Star Wars pin-up.
At the time the Star Wars comic series I was aware of was Star Wars: Tales of the Jedi: Dark Lords of the Sith (if that isn't one of the longest titles for a comic book I'd be surprised), so that's what I drew elements from for the pin-up. I've no idea who the characters are or why people were flying around on gigantic, formless bat-creatures. The art in the series seemed rushed and unfinished so it was hard to get a grasp of the characters and design. There must have been some implication that this was the book I was supposed to try out for or I think I would have just drawn something from the trilogy.
Something else hit my desk that had to be drawn right away, so I didn't pursue this further for that and other reasons. Despite hearing that Dark Horse liked the piece, no name from editorial was involved in the discussion, so I had no idea what "like" meant in relation to getting an assignment. Further, I was learning that this agency would represent nearly anyone who could competently hold a pencil, or pen, or. . . you get the picture.
There was a very good chance that this pin-up wasn't in response to an editor at Dark Horse saying they liked my work but a result of the agents telling everyone to draw a Star Wars pin-up so they'd have a bunch of options to show the editor.
When I was trying to break in I had heard great things about Mike Friedrich's Star*Reach agency and I had some positive communication with Sandra Cho (I hope I'm remembering her name correctly). She gave great feedback on my work, but also indicated the work had to be at a much higher caliber before they'd represent me. What I heard about them is they did represent their creators; helped find them the sort of work they really wanted to do and made sure they got the best deal they could in doing it. They were picky about their clients so Star*Reach would have a reputation for quality clients when they met with editors and publishers. At the time I drew this piece I think Star*Reach decided to close up shop and do other things, but I probably still wouldn't have been good enough to get on their roster
It was obvious that couldn't be said about these guys. They did get work for some guys, but editors had to sift through some really bad work to see anything good, which barely made these guys any better than sending you samples in through the mail room. I doubt that this agency had malicious intent, but they weren't cut out to do this.
That aside, I think I wanna make some time in the not-too-distant future to draw me some Star Wars stuff. Love it or hate it, it's still one of the best designed and visually exciting universes out there.
Posted by Unknown at 15:02