This entry is inspired by this Noah Bradley's Don't Go to Art School. Read it.  I agree with most of it and think he outlines a goodly number of alternatives to the many for-profit art schools attempting to lure students  into their very expensive facilities.  His subtitle, "The traditional approach is failing us. It’s time for a change." is something I'd take issue with.  Traditional arts education had been abandoned in favour of institutional education structures for decades.

My first thought whenever this discussion is how quality art education has been crippled by being crammed into the college and university system.  The compartmentalization, the application of artificial constraints, the requirement that courses feed into some sort of career matrix and the expectation that all graduates through this sort of assembly line should be able to find work as an artist of some sort.

That's where the problems started.

It can function with art-related fields such as animation or video games, when there's overlap of traditional art fundamentals and specific technical knowledge and skills.  There people happily employed in studios with only the most rudimentary drawing skills.  I'm going to leave that aside and specifically deal with art careers and education requiring advanced drawing and painting skills.

Artists are never hired because of a diploma.  Portfolios are everything.  Anyone who tells you different is lying or ignorant.  This fact alone renders institutional art education for a degree a worthless goal. Pursuing an art degree so you can teach art is a different thing entirely and can be a worthwhile goal, but I feel compelled to say I think there are already too many visual arts programs offering an underwhelming education in the knowledge and skills required to be an artist, so going from a contemporary degree program to teaching is very close to the blind teaching the blind.

Beyond the pointlessness of the diploma or degree, the cost of a arts education is far out of scale with how much an artist could hope to earn in any of the arts intensive fields available.  Quoting Rhode Island School of Design's figures (RISD) as did Bradley, the graduating art student (or their parents) will have around $245K of debt and  will either be trying for the few full-time art jobs out there such as a staff concept artist that'll pay maybe $40K a year.  This is a debt-load most artists will never pay off in an art career.

The next element is career drop off.  Most students graduating from an art school won't be working artists within 10 years.  Many of the graduates will only have done so because of the math involved in institutionalised education;  they do enough of the work to a level of a pass they graduate, regardless of the quality of the work.  These students won't be as successful pursuing work as those who excelled, but the students who excelled are already facing difficulty finding work.  Upon graduating, the artist is now competing with every other artist interested in an available assignment.  In our modern age, that means the recent American student is competing for the same assignment as an Irish artist with 20 years of experience and they'd both competing with another professional in the Philippines who can afford to do the same work for half the rate.  Many despair and find other careers, often incurring more educational debt.

I attended Sheridan College for Illustration in the mid-80s, I'm only aware of three or four graduates out of a class of 50-60 who are still producing artwork as their primary career.  If I recall correctly, my tuition was only $800 a year.  I think public college tuition fees in Canada range from 6-10K today.  Significantly better than in the US, but still terribly expensive for most families.

There's also the matter of the instructors; arts programs will have to assign inadequate instructors to classes due to contract, union or tenure.  That bad third year painting teacher might be an excellent first year life drawing instructor, but rules, contracts and schedules dictated this bad choice. I point this out even though I'm generally a pro-union guy, but a good solution for one thing can very easily create a new problem elsewhere.

And finally, all students don't learn at the same pace -- and this is true of most fields so it shouldn't be a surprise.  Art schools fall into three and four-year programs for the most part.  In my years as a student and an instructor I've never encountered a art student who found this too slow, but a great many who found it too fast.  Commerce dictates the programs aren't longer -- who in the US could afford the resulting $300-350K debts that would result!  Those who lag behind  lose out, one way or another.

The reasons above are what I think have contributed to the sad state of visual arts education in North America.  That being said, I'm not quite ready to chuck it all to the rubbish heap and recommend artists go it on their own.  Art school gave me a solid foundation in a reasonably quick period.  Looking back from 25 years on, I did learn considerably more on my own than in college, but I never learned as much in such a short period of time.  The concentration of information and fraternity of students are worthwhile elements of an art school in addition to the attention and guidance from (hopefully) skilled instructors.

Change is needed as the current structures do not serve the needs of the students or the visual arts field.  There are too many schools asking too much for far too little in return.  If the choice is between endless debt for you or your family or being self taught, go self-taught, but I'm enough of a proponent of a sort of art school that I can't fully buy in to Bradley's position.  Institutionalised art education does need to be put aside.  I'm not alone in thinking this as there's been a significant movement toward a more traditional art education, most notably expressed at the Art Renewal Center.

I think the model to pursue would be the one modelled by Watts Atelier in California.  Bradley linked to it in his piece as well.  I've had a crush on their program ever since I started teaching.  Take a good look at how they offer their programs and their courses and what courses they offer.  The costs are significantly lower than the for profit programs, the pace is largely self-determined and the instructor level is uniformly high.

Given the opportunity I'd jump at the chance to be a part of just that sort of program here in Canada.  The closest thing to it I'm aware of is The Academy of Realist Art in Toronto, though they skew far toward the classical fine art atelier method than the Reilly-inspired commercial artist model of Watts.  That being said, the core of being a solid illustrator is mastering composition, drawing and painting, so not having ready access to an illustration course or a digital painting class is not a hardship.

While I'm not ready to say "don't go to art school", I'm more than willing to say most art schools aren't worth your time or money.

(this is all first draft.  Written in response and support of Bradley's piece)
Posted by Unknown at 20:04 3 comments: 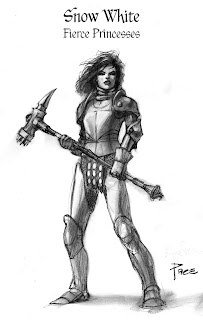 I got a little bent out of shape when I saw that bikini armoured Disney princesses photostream yesterday.

This is where I start my thinking of when Fierce Princesses is mentioned…
Posted by Unknown at 01:18 No comments: 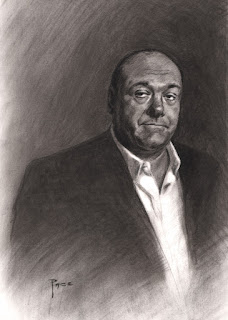 ~R
Update:Most of my ebay auctions go to charity (my local food bank is my preferred one, though I've directed the proceeds to others), but I've decided the proceeds from this one will go to help the people of Calgary as they deal with the flood on top of what I was already able to give.  I lived a fair amount of my childhood in Calgary 's a little harder to watch this city go through this. : http://www.ebay.ca/itm/330944760061?ssPageName=STRK:MESELX:IT&_trksid=p3984.m1555.l2649
Posted by Unknown at 17:41 No comments:

This was a really interesting commission.  The client wanted my reinterpretation of the cover of the first issue of Conan he bought. . . . 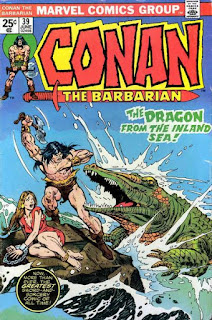 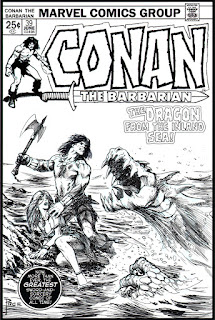 It was a bit of a challenge to recreate the logo and trade dress, but I enjoyed the whole process.

Just finished an interesting assignment;  a play-mat for a collectible card game company, Card Advantage.  It allowed me to try an experiment.  I've been meaning to try to mix how I use traditional B&W  line art with digital colour for a while and the content of this image really allowed for that. 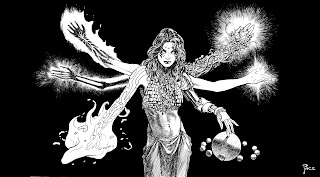 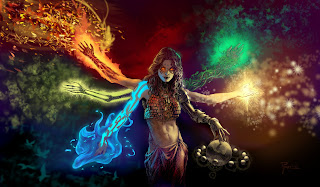 I'm trying to remove some self-imposed limits with this.  To no longer approach a piece thinking it has to look like digital colour under a black ink drawing or that a painting has to avoid line contours or textures. 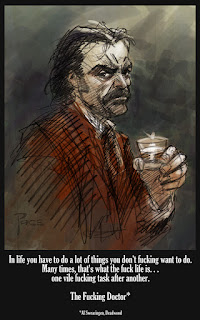 Not as big a Dr. Who fan as some, but I'd become one if they cast Ian McShane as the new Doctor and let him play the character as Al Swearingen from DEADWOOD.