I've cut n' pasted this from a reminder e-mail I received about the convention this weekend:
The 13th Annual FAN EXPO CANADA is this weekend, August 24-26, 2007. The main events will be held in the Metro Toronto Convention Centre, SOUTH BUILDING, 222 Bremner Blvd., Toronto, Ontario, Canada.

The shows operation hours are:

Friday 4pm to 9pm
Saturday 10am to 7pm
Sunday 11am to 6pm
I'll be splitting my time between artists alley and the Max the Mutt booth.
* * *
The Chicago convention was a blast -- spent the entire weekend in the company of Ethan van Sciver and Moose Bauman. At Ethan's urging I did a few comics pages to show around, since it seems like forever since I did new comics pages. 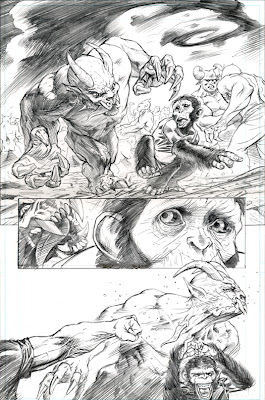 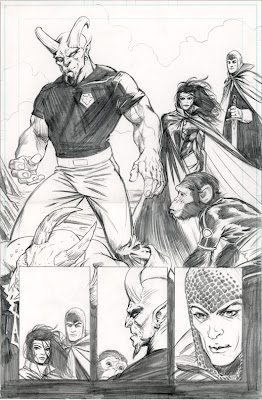 I got to meet with some very enthusiastic folks at DC and Top Cow who seemed disappointed that I actually didn't have the time to do anything since school's starting so soon. Oh, well, there's next summer to look forward to.
* * *
My flight back from Chicago was the Monday afternoon following the con, so I got the news of Mike Wieringo's death almost as a wake-up call in my hotel room. Todd DeZago called Ethan van Sciver, who called me.
I knew Mike dating back to just before he started drawing The Flash for DC -- he was a studio mate of Richard Case at Artamus, who I met less than a year previous. From almost that point forward Mike and I started talking every couple of weeks for the next 15 years. We got to hang out occasionaly at cons we were both attending, even sharing rooms a time or two. We were both looking forward to seeing each other in person again for the first time in years at the Heroes Con in Charlotte until my stupidity over my passport (thought I had another year on it, but it had expired in February and I couldn't get a new one in time) stopped me from flying into the US. Mike wasn't attending Chicago that year -- so I'd have to see him the next year in Charlotte. . .
The last phone call I had with Mike was about a week or two after Heroes, his back was still bothering him, he was (rightly, in my opinion) feeling taken for granted by Marvel and overshadowed by other of the Marvel artists (which was just his humility). Despite that, we joked around as always, talked about random shit from comics to politics to football. I told him I'd give him a con report Tuesday morning after I got back from Chicago and we said goodbye.
The wave of shock grief that rolled across the comics end of the internet with the news was understandible: Mike and his work had affected people so profoundly. It did make it difficult to go online for a bit, seeing people who only knew him through his work go on at length about their feelings of loss in messages or blogs when I didn't even know how to begin articulating my grief. I thought, maybe, I'd draw something, but that doesn't feel right, either. Maybe later I'll be able to wrap my head around drawing something. . .
The hardest thing of it, for me, is that I'm feeling completely disconnected from this. I've known the man for over 15 years, but I never knew his brother other than through Mike's anecdotes of through his online Mafus posts. I think I talked to Mike's wife during their brief marriage once, maybe twice, but only in the briefest of "Hi, is Mike there?" way. Over the years I lost contact with Richard Case (as we both moved away from comics) other than Mike's updates (Richard and I both have son's named Brendan -- the Case/Pace thing was always a laugh). It's part of the nature of being a comics freelancer, I guess; you'll have friends from across the continent, if not the world, who can be your best friends, but you'll only be connected to them as long as they can pick up the phone.
The family requested that all those interested donate to heroinitiative.org, which I think is a fine choice. They'll be keeping Mike's Blog up (linked to the left) as a tribute, which I also think is a fine choice.
~Richard
Posted by Unknown at 09:02 No comments: