Another unearthed piece -- more recent than yesterday's RUNE stuff, though. 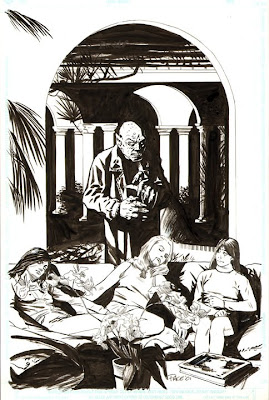 Years ago I was in talks to draw a licensed comic book based on a horror role-playing game; I drew this pin-up as a part of the application process. I don't know if I was asked or volunteered to do it, but there it is.
I've always liked the horror genre and think comics can do it well, but the script I received for the 48-page one-shot wasn't interested in really being a horror comic. It was a goofy exercise with a baseball-capped "Noo Yawk" vampire behind enemy lines during WWII. It had a few nice sequences, but the main character was so goofy that I couldn't stand it. I asked for rewrites even though I laid the book out, but I don't think the publisher was listening or understood that I was telling him that I wasn't going to draw the thing unless it was rewritten to actually be a horror story.
One thing I've learned is that I'm impossible to live with if I'm working on something I hate, so I get out of those situations as quickly as possible.
The interesting thing, to me anyway, is that I found the whole art job I did for the final issue of Millennium's Nosferatu comic. It was really the first full comic I was paid to draw and I ended up penciling, inking and partially rewriting the thing as I went. I think it might be a bit of a blast to post the pages here. I think the author recently put a trade collection of the book out, so it might help him move a few copies.
~Richard
Posted by Unknown at 12:00