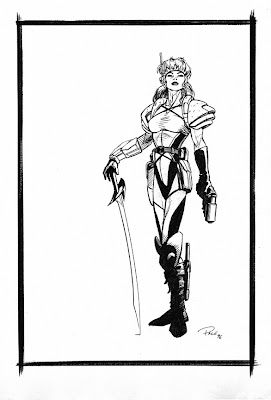 I've described the aborted Vampirella mini-series before, but I just found this piece in that stack of old art. After reconstructing the cyborg vampires from the future idea I'd written for Blade at Marvel (which got cancelled) into the cyborg vampires from the future for Vampirella at Harris (which got cancelled) I was left with a large pile of story and plot elements dealing with cyborg vampires from the future.
Considering that the only thing in common between the two stories were time travel, vampires and hover-cycles, I had quite a bit of developed material to play with and I considered yet another new story, but this time spinning out of a few plot elements and one of the characters, Cassandra, I developed for the Vampi series. I did a few sketches, the above drawing, did a little writing and then got really busy doing something else.
I just realised this makes yet another instance of a vampire project I put some effort into.
I don't mind the costume so much, but the arms and hairstyle would certainly have to go if I ever dusted this off and the drawing itself shows my limitations at the time. The scan is from a photocopy -- if I find the original I'd probably makes some changes before posting.
Posted by Unknown at 14:12