In Over Your Head, part 2 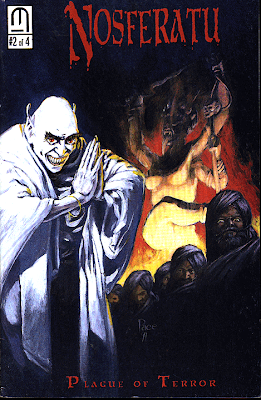 So, after leaving Innovation's vampires behind I found myself in contact with Millennium Publications and was talking about working on their vampire book, Nosferatu: Plague of Terror.
The series had already started, the first issue was either about to be or was already published and the artist had left for Marvel. I was asked to paint a cover -- which I did. It was a pretty good one, as I recall I had stepped above my skill level on that one. The couple handling the publishing end in Florida said they were really happy with it, but lost it. I recall the phone call pretty clearly; they had moved during the production of the issue and the painting just disappeared. The wife explained that they needed another cover as soon as possible and, here's a good part, I'd get paid some sort of kill fee for the cover they lost. Kills fees are usually reduced payments for projects where the freelancer's work is deemed inappropriate for the assignment prior to completion. Their partner who was the contact for all the financial elements, in Rhode Island, paid me in full for the lost cover.
The cover above is the quick replacement I did. Given less than half the time and while actually drawing some pages inside the book this painting is decidedly a result below my abilities at the time. I only recall drawing anything from this issue in the most vague way. I remember gathering reference and. . . well, that's about it. I think I only drew a portion of the issue, but I'm not even certain of that. While this was going on my fiancé and I had moved into a house in Hamilton, Ontario that was turning into quite the nightmare. After everything having to do with the second issue of Nosferatu was dealt with, we'll have moved into a better house and I'd start partially writing, and penciling and inking the entire fourth issue.
And I still had no idea what I was doing other than getting further away from what I thought I wanted to be doing; painting edgy comics.
Posted by Unknown at 07:50