Thought I should give another view of the worst version of Ghost Rider in case anyone wasn't sure based on the image I shared before: 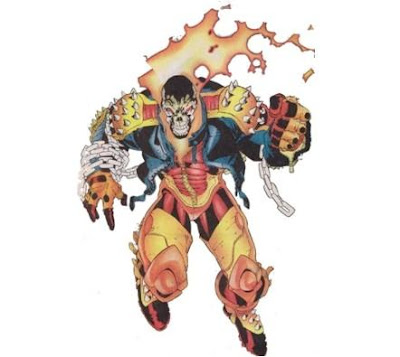 And here's a Ghost Rider villain, which is really just the base Rider with bigger spikes and teeth. Shown for completeness and to consider as I move a little in this direction. 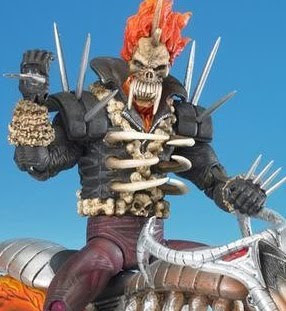 So, disregarding the original cowboy Ghost Rider, we have a few versions to look at; Johnny Blaze with his red hair and sideburns-to-die-for, his kid brother Danny Ketch with his darker and brooding look and. . . 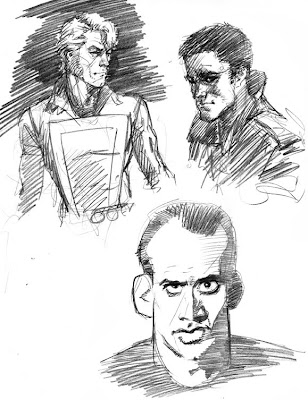 . . .the movie version.
I think we can ignore that one here.
Actually, I think I'm going to ignore all of them. There origins are some of the worst parts of the characters --especially with the added medallion stuff pasted on later which I'm not going to get into at all.
Here's why their origins are bad: both of them essentially made deals with the devil for other people and then got screwed. Any moron knows that the devil doesn't play fair so the writers already decided Blaze and Ketch were morons from page one. They were written better later on, but I prefer to write smart characters who are capable of doing smart things and being able to out-think their enemies.
Now, I really like the Hulk, but you know he usually operates in one mode.
So, I want a Ghost Rider host who's smart - -which immediately means jettisoning the established GR methodology to getting a good guy to work for Mephisto. The answer is already there and I'm more than stunned that it hasn't been mined already. He starts out as an outlaw biker.
The host for this revamp isn't a good guy working for the Devil, but an evil bastard who should end up in hell and being host for the spirit of vengeance is his chance to avoid all that infernal poking and prodding.
A criminal nomad. An outlaw in the old west cowboy sense. Young enough to be physically capable, but hard as the road and the heart of a snake. 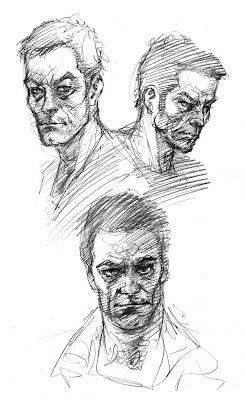 I want him weathered and worn with hard edges, but handsome enough to know he could clean up nice. The sketches above took a few minutes each to start getting the idea of want I want. They aren't what I want yet, but they're moving in that direction, I'll be doing another dozen or so, retaining the bits from the previous versions that I like, but I don't want this blog entry to be nothing but developmental head sketches.
Especially when there's a few larger issues to play around with. 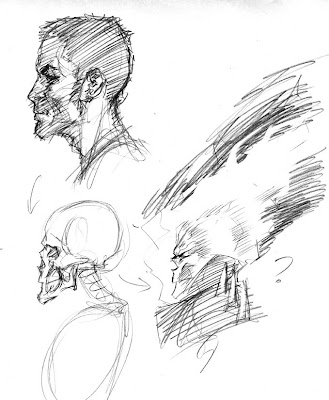 The one on my mind at the moment is the Ghost Rider anatomy. Or, really, what the heel is he when he transforms? He fills out the jacket and pants as if he had flesh. His skull scowls as if it were made up of a more flexible material.
Now, I like the scowling skull, but I want to play with a more thought-out character, so things are going to be played with a great deal.
Next time.
Posted by Unknown at 20:40

Apologies if you aren't looking for suggestions but I've been really enjoying your blog and some of these exercises you do, so I thought I'd offer a few ideas.

Have you thought about the flames as a means of animation for the face? Essentially the skull is just a skull and either the flames themselves or the shadows they cast across the skull give expression. Might be very hard to pull off though.

But the rule of exchange means the flames/aura can only take the same shape/mass as his body. Otherwise as the spirit of vengeance, with all the shit us humans pull, the flames could be a towering inferno.

Perhaps even the flames/aura horrifically burning away his skin when possessed, only for it all to regrow once it's left. Making him a seriously messed up individual because being the Ghost Rider is a curse not something 'cool'.