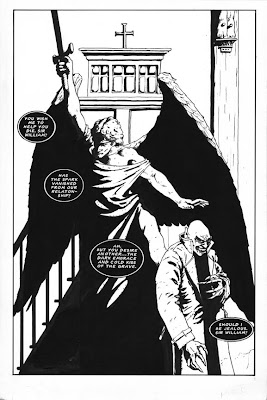 Still in way over my head, I started the flesh out the issue and draw it as I went. Doing this issue was, in many ways akin to what I've heard others comics guys describe what it's like to work on the last issues of a cancelled series. As I recall, the writer/co-publisher, Mark Ellis didn't really seem to care what happened with the final issue as long as it ended. I'm pretty sure this series was a sales failure. He rewrote the dialogue and captions Marvel style after he saw the issue.
Anyway, every issue started in a church, with a woman doctor being held captive by Nosferatu, his homeless servants and a bunch of rats. The previous issues had flashback sequences revealing the long history between Nosferatu and an immortal crusade knight, William Longsword, this was the climax and essentially a long fight scene between all the players.
Art-wise, I decided I didn't have the skill to render my way through this, so I simplified where I could. I inked with brush and Pigma markers throughout on double-thickness Mayfair coverstock. The lettering was, I think, computer-generated on a Mac and pasted on. This being 1991, I think this makes Millennium one of the early adopters of computer-lettering technology.
Posted by Unknown at 09:32