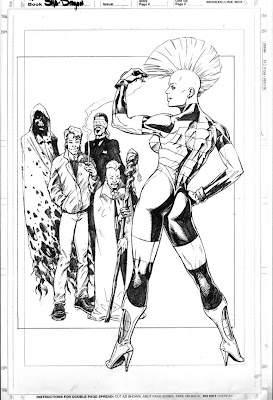 Found a photocopy of the pencils for this -- no idea if it was ever inked, colored or published.
I was showing the pencils I did on Pitt: In the Blood around at either a New York or Chicago comic convention and I had the pleasure of meeting Erik Larsen, who liked my work enough to offer me a She-Dragon mini-series.
At this point in my career I didn't really know how to say no to work -- so every job that came along while I was writing this series ended up getting put in front of it since they had deadlines and this mini-series didn't. Eventually, Erik couldn't wait for this series as he had plans for the character and we let this drop.
In hindsight, had a deadline been set from the start, even if I ended up dragging my ass and been late meeting it, it would have been finished instead of sitting on the to-do eventually pile until it died. Erik's highly self-motivated -- I mean, just look at his work at Image -- so it must have been hard for him to be continually working with artists who needed the crack of the whip to move forward.
While I believe I'm considerably more self-motivated than I was way back then, I still prefer to work towards an established deadline.
Posted by Unknown at 12:12