In Over Your Head, part 1 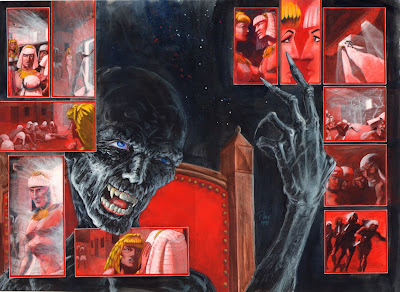 So, I get out of Sheridan College and I want to make a go of it as a comics artist. However, inspired by the likes of Bill Sienkewicz and Dave McKean, I don't really want to do superheroes at the time, but I want to do painted comics.
I was told I was the best painter in my graduating year, but that, in retrospect, is a little like being the lightest rock in an all rocks swimming race. I may have wrote this already, but our first year painting instruction was wasted by having the program's worst instructor run it. She had no art background but she had an education degree and was required to be on staff and the rest of the faculty thought she would do the least harm in 1st year painting. The only instruction of value I would get was in second year where we were introduced to Hawthorne's book and learned a little about the high palette as well as actually doing some painting studies that taught us things. The last year was another waste of time and the instructor was more interested in drinking coffee than anything else. The few times I asked for help, he said he had none to offer.
So, with that level of skill I went forward and started putting a portfolio together, did some work here and there and eventually stumbled across a mention in some comics news pamphlet that Innovation was actually looking for artists to expand their line of Anne Rice comics.
Next thing you know I'm painting a few pages for an art test which weren't good enough to get me the gig painting The Interview With the Vampire, but were enough to get me onboard painting over Daerick Gross's pencils for the very, very late The Vampire Lestat.
It was a weird and frustrating experience. After busting my ass on a couple of double-spreads I read that Innovation, the company publishing the series, had a rather unorthodox method of getting the book ready for print.
In the early 90s artwork would either be photographed for a transparency or it would be affixed to a large drum-scanner. Film would be shot from the scans and then the pages would be put into -- a forget it. It's complicated and no longer how things are done. Let's just say publishers could very easily turn double spreads into pages in a book with nothing adverse happening to the art.
Innovation decided the treatment of the artwork wasn't a concern. The artwork was physically cut wherever needed so they could save a few buck in production costs. This meant the double spreads I had just finished were going to be cut in half and probably trimmed on more sides as well.
Yeah -- that was my first nasty experience dealing with publishers at the low end of things. Daerick Gröss was a heck of a nice guy -- he had to be to work there as long as he did. I think he went on to do his own superhero or erotic comics at another company -- the memory is vague over that.
I wanted out. On the way I was asked if I was interested in their newly acquired Nightmare on Elm Street license. I read the script and decided I had better things to do with my life. 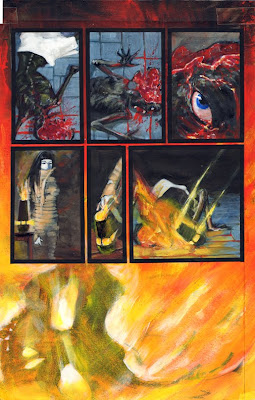 So I spent a few months painting in a style not mine for a publisher I was embarrassed to have worked for. It wasn't quite the step forward into professional comics I was hoping for.
From there, I ended up connecting with a couple who were, from what I was told, happily ex-employees of Innovation. I'd do a fair amount of work for them, including my first entire comic.
~R
Posted by Unknown at 14:23