Drawing From Zero to Sixty 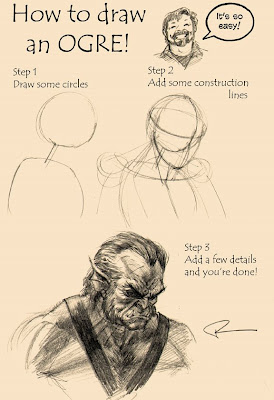 While I am teaching again this spring, I’m not teaching drawing. So, to sate that part of me that needs to pass along that sort of knowledge, I think I’m going to use this blog as an outlet. While I bet I’d get a great deal more interest showing people how I draw hot babes or monsters, it wouldn’t be playing to my interests as much (though I am interested in drawing hot babes and monsters). I really want to deal with some of the key things that I believe can make people draw better.

Most courses and books start out by giving the aspiring artist something to draw; a geometric shape, a model, a still life or, should the teacher be an idiot, a photo. These kids are asked to go from zero-to-sixty in the first lesson and most instructors are too far developed in their own experience to really understand how many developmental steps they may be skipping. As important as observational drawing is the historic methods haven’t really been reconsidered for some time.

Really, what are the required developed skills to do good observational drawing?
Hand-eye coordination – being able to get your hand to make the marks where you want them on the drawing surface. This deals with one of the first abstractions of drawing: reducing the three-dimensional to two dimensions.
Spacial analysis – the ability to see the relationships of various parts of the subject either by distance or differing angles.
Line control – once you’re making the marks where you want them you have to be dealing with one of the illusions you have to create when representing three-dimensional objects on a two-dimensional surface. Your line can indicate texture, volume, weight, depth, and value.

I’m going to stop right there. it's enough to start with.

The first drawing class typically asks the student to incorporate two things that aren’t taught (hand-eye coordination and line control) as a part of the process to achieve a third that’s already quite difficult to learn. I can hear some of my former teachers voices in my head; you learn them all at once by doing them all at once. I believe that sort of educational philosophy is completely out of step with how we’re currently teaching today’s kids to learn. The teachers defending 70-year old teaching methodologies like Nicolaides’s archaic The Natural Way to Draw with their dying breaths should really just hurry up and die already. A new century calls for new methods to educate built upon the successes of previous methods. Bridgman, Loomis, Reilly, Hale, and even Nicolaides have all added great things to the arsenal of both the drawing student and instructor, but their works are several decades old and often exist independantly of each other. Looking at the educational work from artist instructors like Ron Lemen and others tells me that pushing old knowledge forward into new developmental tools is the way to go.

Now, if you ask any of my former students they know I’m possibly the biggest advocate for an artist keeping a sketchbook, so my first reflex to develop learning tools will involve daily use of a cheap black hardcover book. I’m also a booster for aggregate teaching methods; show the student something, make sure they understand it and can work with it then show something to add to it. Lessons develop slowly, but the gradually increasing complexity has a similar effect to resistance training with weights. You may not be able to bench press 200 pounds the first time you enter the gym, but by continually and gradually increasing the weight you can press you eventually reach the 200 pound target and surpass it.

Over the next few weeks I’m going to create three sketchbook exercises that will help anyone interested in following along develop towards drawing better. The goal will be 15-30 minutes of sketchbook work a day. A week, perhaps two should be enough to get comfortable with the core concept of the exercise and allow the addition of the second exercise to the process, followed by the third.

First up, though, I believe I’ll have to discuss the importance of keeping a daily sketchbook.

Email ThisBlogThis!Share to TwitterShare to FacebookShare to Pinterest
Labels: how to draw

Well, if you post it I intend on doing it. I need to improve my basic skill.

That's just what I've been waiting for you to do since I've started reading this blog. So thank you! And I'll be along for the ride.

Btw, I've started working on 40 Robots sequentials. They're still very crude, but I hope to get a better handle on how to do them as I go along.
You can get a look at the first two pages here and here.