After telling you all that I think there are some very basic skills not being taught at the earliest stages of traditional arts training and then making a convincing argument how important daily drawing is for the developing artist I'm ready to drop the first exercise on you.

Exercise #1
For one week spend at least ten to fifteen minutes a day drawing 1 inch squares in rows. Draw them as accurately as you can and make the rows as straight as you can. It's doesn't matter whether you draw them all at once or scattered across the day (though they do get easier as you go). I tried to keep them about a quarter-inch apart (I think the alleys between the squares help). You can draw the first one with a ruler to make it easier to draw the rest. I measured the first one I drew, but freehanded all of them. Now, I rarely try to get any line in one go; I usually lightly indicate where I think the line should be with the faintest of lines then make a stronger, darker line when I'm comfortable with the size, straightness and length of the line I'm going to draw. 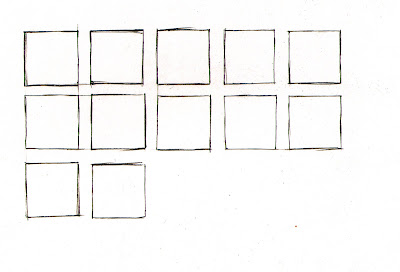 I'm sure there are artists out there who can do this without the wobbles and rough edges you can see in my boxes. I'm also pretty sure some of you may struggle with this exercise, but it should develop your hand-eye coordination as well as some simple spacial analysis. While I think that's worthy enough for freehand squares to be an exercise, being able to draw squares with some degree of accuracy is very useful for drawing the figure and perspective from imagination.

It's pretty simple geometry, but rectangles and squares can be easily divided into halves, quarters, and thirds without having to recall too much math. Perspective drawing, which is really the bread and butter of imaginative drawing, really comes alive if you can take simple blocks and divide them into smaller sections, but I'm getting ahead of myself on that. 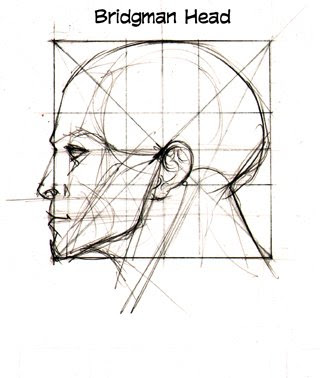 The square is also used by artists as the base shape from which to develop the profile of the head. George Bridgman's is a great place to start playing with the head in a square and, again, this connects with perspective as you can use this as the basis for putting the head in a 3D box and draw the head accurately in perspective.

The downside to getting that head accurately in perspective is that Bridgman's head is really an intentional simplification, as you can see when I drop a square (rectangle, actually, since the head isn't anywhere near square) over a human skull. 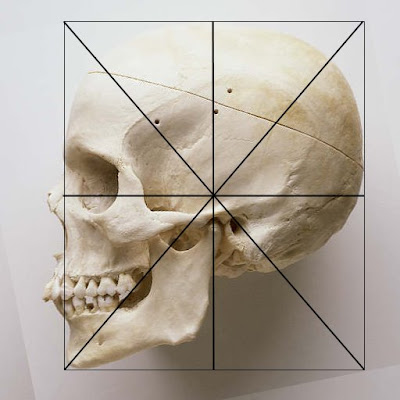 Now, there is a great deal of skull-shape variation within ethnic types so the way a head would fit in a square could change quite a bit as you cross the globe, but, as will most things in drawing you have to start somewhere! 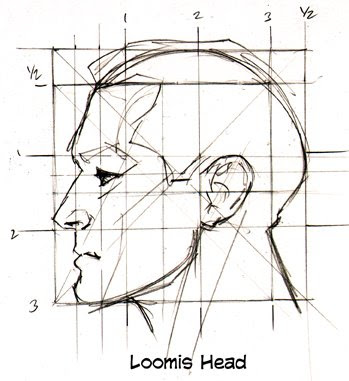 The great Andrew Loomis also built his standard head within a square. As you can see he placed things with more complex planning.
So that's the first exercise, draw as many accurate squares in rows as you can in 10-15 minutes over the course of the day, every day for seven days. Try and spend an additional 10-15 minutes drawing something entirely for you and have fun doing it. Don't worry about anything while doing this part of the daily drawing as there's a good chance the squares were somewhat frustrating. Draw longer if you're having fun, of course.
The next exercise will build on this one and be somewhat more difficult as we start introducing some line weight control.
I've convinced my eleven-year old son to give this a shot and I'll post his results as long as he wants to continue.
~R
Posted by Unknown at 00:21

I'd like to ask you if you have a figure proportion frontal face diagram of Bridgman Head In your style. i liked very much of your tips (I bought 4 Bridgman's book)they are pretty awesome.
Thank you very much

This is great. Thank you for sharing.

Hello There. I found your blog using msn. This is an
extremely well written article. I'll make sure to bookmark it and come back
to read more of your useful info. Thanks for the post.
I'll certainly comeback.

Feel free to surf to my page: Power IGF