Another Friday night open drawing at TSA!
A good crowd and an interesting model again. I found out during the session that next Friday is cancelled due to tours at the school and I think I heard that that wraps up the Friday sessions until January --I'll have to check on that. I've found another place that's advertising Wednesday night life drawing a little closer, so that might allow me to continue trying to suck less at drawing through the holidays. 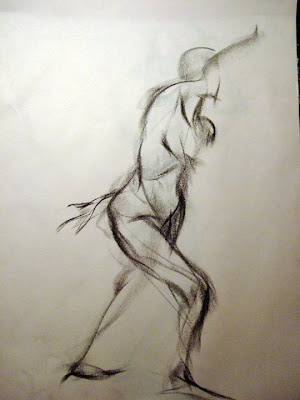 Last session I was rather disappointed with the paltry 15 gestures we did. Tonight we only did 10! Ugh. I need 10 just to get my rhythm started. 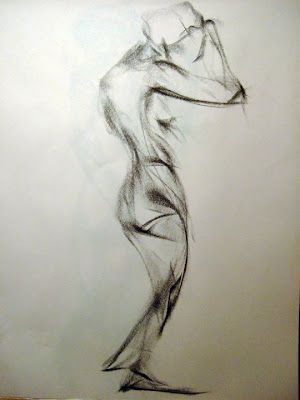 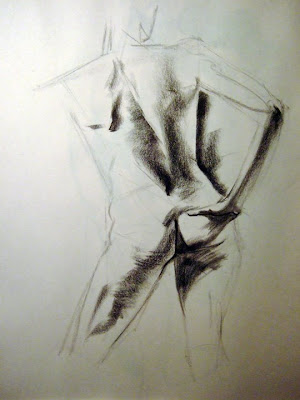 The prediliction toward 5 & 15 minute poses caught me off guard last time, so I decided I'd come expecting to do quick studies of interesting sections of the model instead of trying to get the whole in in the time alloted. One thing I've noticed is that I'm drawing much slower than the I expect, continually being caught by surprise by the pose ending. Hopefully that'll come back with more drawing as well. 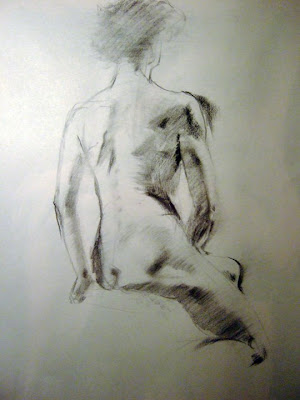 Using vine charcoal to block in quick contours and areas of tone before using compressed charcoal over top. Never did that before, I like it, but I'm still finding my way with it. 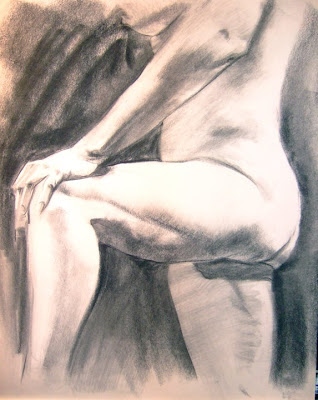 Tonight's model had a tendancy to vvvveeeerrrrryyyy slllllooowwwwlllllyyyy move during the 15 minute poses, which kept altering my point-to-point and angles and I'm still too rusty to accomodate. Perhaps a few more sessions so I can strengthen that part of the memory to work through this. 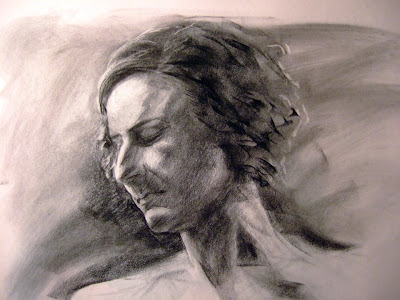 Tried a quick head study; the block in was fine, but as I started placing features her head started turning toward me. . . 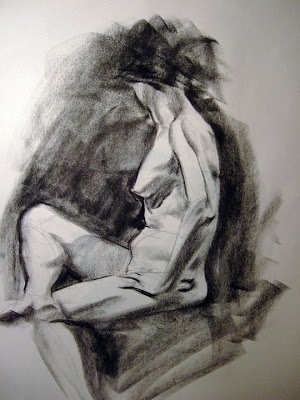 Was loosening up toward the end of the night and stopped trying to do something specific and just sketched big with the charcoal. 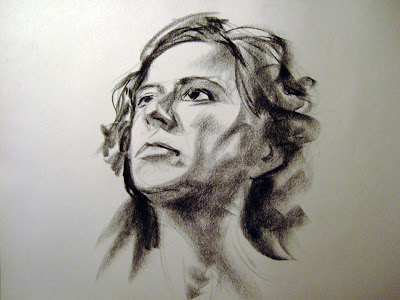 Last 10 minutes I decided to do another quick, but looser, head study.

Hoping to hit Dr Sketchy's Monday night and I might try this other LD place Wednesday.
Later,
~R
Posted by Unknown at 23:34

The Gladstone Hotel offers 2 hour life drawing sessions on Wednesday nights from 8-10. I haven't been, but I heard they have shorter poses; so they attract quite a few animation students. Also, it's at the Art Bar, so I'd imagine the atmosphere is very similar to Dr. Sketchy's.

heey very cool, i think i recognize the first head study - is it tanya by any chance?

very gorgeous drawings, i might have to start dropping in on the friday night courses to see you in action!