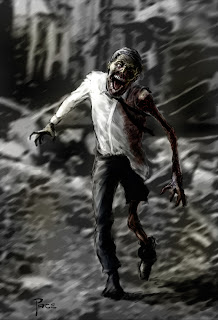 Since I started the blog, I've tried to make it a tradition to start the year off with a quick zombie sketch.  Here's 2012!  Unlike previous years I did this one digitally.

You can see the previous year's  zombies here:
The first ever blog entry in 2007:
http://burningmonster.blogspot.com/2007/01/starting-with-new-year.html

2008 I was hit by by some stupidity and poor communication by a former employer and ended up only drawing a zombie near the end of the month :
http://burningmonster.blogspot.com/2008/01/em-gists-dead-of-day.html

And last year was on time and better dressed:
http://burningmonster.blogspot.com/2011/01/new-year-zombie-2011.html

In hindsight, I think I prefer the textures from  the pencil drawings.  I have a year to think about it.

Hope everyone has a great year ahead of them!

Email ThisBlogThis!Share to TwitterShare to FacebookShare to Pinterest
Labels: zombie