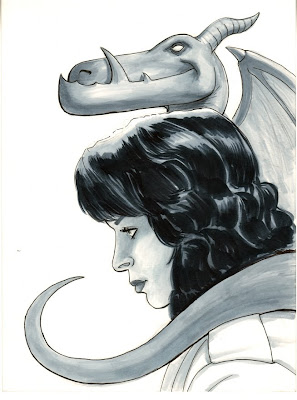 Alright -- typing this at three in the ay-em.
Yawn!~
Today was hot, busy and exhausting! Never seen a Fanexpo so packed with people. I suspect, for a number of reasons, that the overcrowding may backlash a bit; people had to wait to reenter after the staff were told the building was at capacity and I saw that it was quite difficult for people to move in the aisles which may have hurt sales for some of the booths. I've no idea what could be done to remedy this but I expect some changes may be in the offing. This is the first time in a while it was held at the Front Street half of the MTCC -- if it's actually a smaller venue I think it'll have to move the southern hall (which always felt larger).
I don't think I'd be surprised to see Fanexpo become a three-and-a-half or four-day event if it's popularity maintains or increases.
Anyway -- still a great day. Had a great lunch and a later panel with the Dream Detective people. Got to see more of the old faces I missed and meet cool new people too.
Last day in a few hours (11am - 6pm, IIRC).
The Kitty and Lockheed sketch above is unclaimed -- so anyone interested and willing to cover the sketch fee, swing by my table!
Did more drawings, but forgot to take pictures again!
Posted by Unknown at 02:56