What the Hell Have I Been Up To?

Lots of stuff -- most of it was fixing or cleaning up other people's work or stuff I can't share until it gets announced elsewhere. Oh, yeah, we also got a new puppy and the wife spent three weeks away in Europe so I had to adapt to single parenting while crate training and dealing with the last three weeks of my son's schooling. I was kinda busy.

Things I want to pick up again now that things have settled some include returning to monthly ZUDA reviews, posting developmental artwork for things I can share with you, I want to review and suggest a number of art books from my library -- both how-tos and artist collections -- on a monthly-ish schedule. 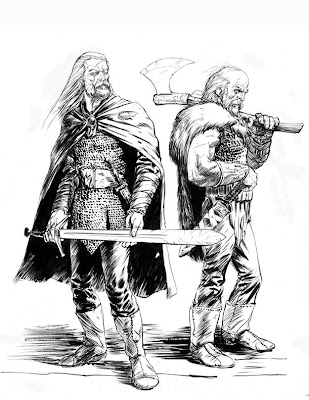 The illustration above was for Damon Sasser's Two-Gun Raconteur, an excellent journal on the works of Robert E. Howard. More info and how to order below:

REH Two-Gun Raconteur #13 in now avilable.
This issue of The Definitive Howard Journal made its debut on June 12th at the 2009 Howard Days in Cross Plains to rave reviews.

Contents include: "The Black Moon" by Robert E. Howard, illustrated by Robert Sankner; "Kingdoms of Clouds and Moonmist" by Brian Leno, illustrated by Bob Covington; "The Hyperboreans Re-imagined" by Morgan Holmes, illustrated by Richard Pace; "Kings of the Night: A: Bran Mak Morn Portfolio" by Michael L. Peters; "The Skald and the King" by Chris Green, illustrated by Bill Cavalier; "The Long and Winding Road: A Poetic History" by Rob Roehm, illustrated by David Burton; "Sailor" Steve Cositgan: A Portfolio" by Clayton Hinkle; Verse by Frank Coffman; "The Mighty Revelator Passes" Tributes and Final Farewells to Steve Tompkins, plus additional artwork and features.

LIMITED EDITION of 250 numbered copies.
Price is $23.00 per copy ($19.50, plus $3.50 for US shipping and handling)
Order from and make checks and money orders payable to:
Damon C. Sasser6402 Gardenspring Brook LaneSpring, TX 77379
Payment also accepted via PayPal:orders@rehtwogunraconteur.com

I really enjoy contributing to projects like this, partly because I'm a Howardhead, but also because the journal is so well done.