I Know an Old Lady

Had to move a bunch of stuff around in my studio as a whole bunch of family chaos and stuff has let me get behind in its upkeep and I stumbled across a pile of some much older work. The oldest was the children's book I did in my final year at Sheridan.

Looking through it made me realise that all the work I've been doing on the thing I'm currently working on was hitting the wrong visual notes.

The book itself was started after the first direction proved wrong. Only after rejecting my first story and one of my classmates suggesting a child's rhyme I never heard before did I follow through with this: 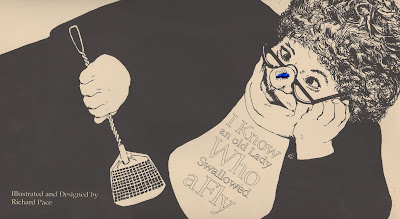 We silk screened our covers -- yeesh, just remembered how much I hated silk screening!
The Old Lady was printed in a dark warm grey on this beige cover stock, the fly was black with hand tinted "fly" colours (usually blue or green) painted in later.

Once the rhyme was chosen the design of the book was all there in my head. 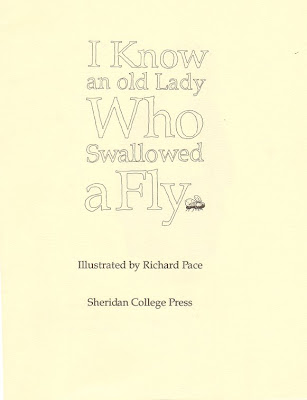 The main character's look was loosely based on Lillian Lampert, an instructor at Sheridan. If I ended up drawing I Know an Old Man Who Swallowed a Can I might have drawn Frank Neufeld, who was my Book Illustration teacher. 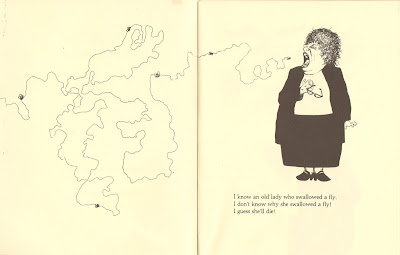 I ended up drawing so many things in this book repeatedly, trying too loosen up and simplify the drawing. One point, Frank told me I should just patch in the parts I wanted to change or redraw only later to tell me to stop as the patches and revisions started stacking up into a substantial thickness.

I think I drew the right hand in the spider piece over a dozen times until I was happy with it. I also had backgrounds in all the pictures, like the one in the bird drawing, but they seemed to get less important as I fell increasingly in love with the stark black of the Old Lady's clothes. 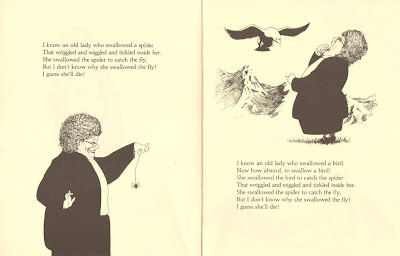 I recall original planning a full figure shot of the spider piece, but decided that I liked the left hand pointing upwards toward the next image more than another similar-sized drawing of the Old Lady across from herself.

This one was a lot of fun to plan and play with, but I would have probably redrawn the face and cat a few times had time allowed. 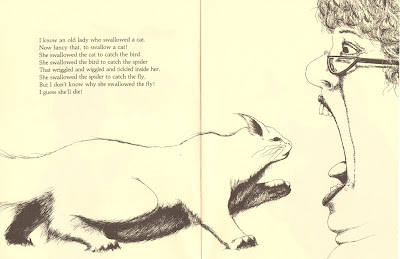 I was overly concerned with shrinking the Old Lady down after the giant head-shot on the previous page and ended up with a dissatisfying small Old Lady chasing the dog. I also wanted to build up to her getting fatter and fatter with every critter she swallowed. She really should have filled that side of the spread. 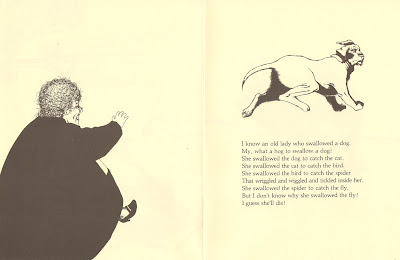 I was really using a weird range of materials as I worked on this; I was using markers, nibs, bond paper, bristol board, cover stock and this weird typing corrective tape. Used properly, you'd place the tape between the key and the piece you just typed that you wanted to erased. the pressure for the key striking the paper would force this white pigment on one side of the tape into the paper, kinda like a dry White-Out. 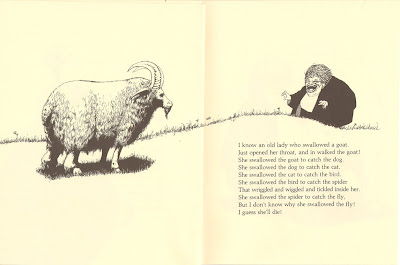 After I'd lay in a shadow area, like that under the goat, I'd lay the tape over the front edge of the shadow and draw in some blades of grass. Why I didn't just use graphic white and a fine brush is a question I'll never be able to answer beyond "It seemed like a good idea at the time."

My first cow was too realistic, I thought. 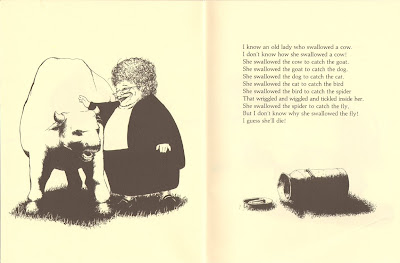 I simplified it into the cow-like creature because I didn't think the real cow-shape worked. Of course, my weird looking cow meant I had to draw and patch in a weird looking goat in the previous spread. I did have a blast drawing the milk can from memory. My mom had one for a craft project she never finished, so I remember moving it from house to house as a child, seeing it sit in a corner, partially covered in crushed egg-shells.

Hey -- a weird-looking horse and a suddenly thin Old Lady. 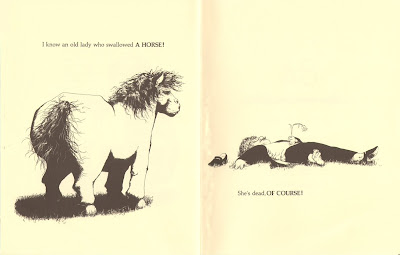 Right from the start I knew I wasn't going to draw her actually swallowing any of the critters or a believably exploded Old Lady since this was really a children's book, not a grown-up book in kids dress. The flower was really to imply that she wasn't as dead as she looked to any child possibly traumatized by the idea of someone dying in a kids book.

Of course, if she was just play-acting death, why does she have a tombstone on the last page? 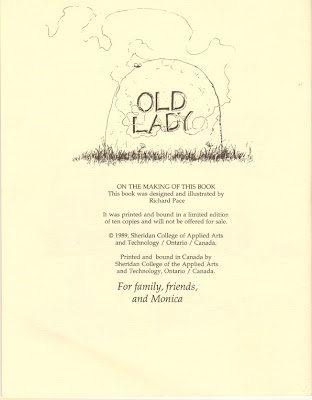 This was another element I "saw" in my head when the project materialised and one of the first things drawn and I thought the playfulness of the fly showing up suggested that everyone was okay anyway.
Yeah, the placement of the dedication is off. We were using wax and stats for everything and I think it shifted after I stripped it in.
There's a few other old things I might share later this or next week.
~Richard
Posted by Unknown at 19:52

Wow, that's very cool! Although I don't know if I would read it to my little one...

Wow, this is awesome!
I love the looks of the old lady creeping up on the animals.

LOL, Love the spirit in these drawings. We had the same instructors - 'nuff said. :)