Along with a copy of I Know and Old Lady, I found a pile of photocopies of comics and illustration work from the '90s.

Back then, Joey Cavalieri was one of the coolest people at Marvel and I really wanted to work with him, so I pestered him a fair amount. Eventually he asked me to do a Ghost Rider 2099 sketch. He liked it so it turned into a pin-up assignment -- the pencils are below: 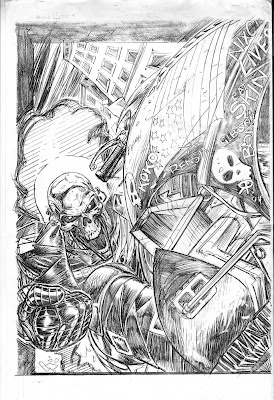 It was Chris Bachalo's book at the time, so I let his fingerprints show up all over my work thinking it might lead to a fill-in of some sort.

Joey asked me who I wanted to have ink it -- I was about to suggest Mark Buckingham (who had the main gig already), but then Joey asked if I inked my own work. . . . 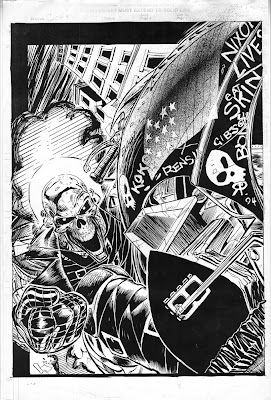 Even though I really hadn't inked my work for a while, I said yes and proceeded to wreck my own pencils. If another inker plopped that flat black on the sole of GR's shoe I probably would have spit nails.
Joey was kind enough to ask for a generic cover for his files after I did the pin-up. 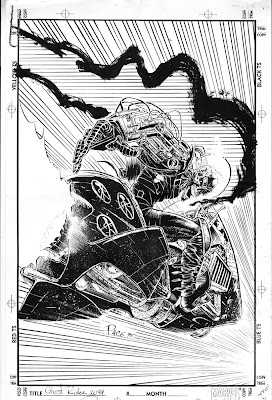 I winced when I saw how badly I bungled the perspective on the bike, but I think the inking improved a smidge.
I got swamped with work for quite a while after this and the next thing I knew Joey was gone from Marvel (as were a ton of other people I knew and had worked with).
Joey landed over at DC and looks like he's doing fine -- I think he's editing my pal Ethan's new series.
~Richard
Posted by Unknown at 16:46

I am no 'original art' person at all, but, damn, I would definitely buy either of those...

(It also made me feel, that Marvel should be reprinting the 2099 stuff the way they did the Age of Apocalypse or Onslaught...)

I think I sold the pin-up years back. I don't know that I ever got the cover back.
I would like to see a collection of Ellis's Doom 2099 stuff and David/Leonardi's Spider-Man 2099.