Below and side-by-side are the pencils and the inks for the piece.  I mentioned I keep my pencils rough to allow for a more spontaneous and enjoyable experience in completing the drawing as opposed to just tracing etched-in pencil lines.  That allows for a certain amount of freedom, like in changing the intended Moebius-style clouds in the pencils to the Franklin Booth-style explosion of clouds I ended up drawing straight in ink. 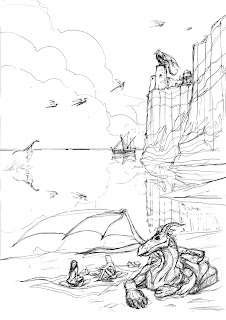 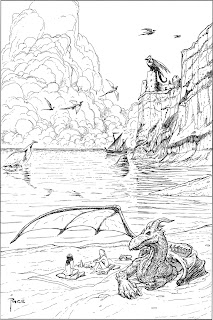 Another freeing element of my current work flow is the freedom it grants me to make mistakes.  If the Booth clouds didn't work out as planned, or if I messed up any other portion beyond my ability to fix on the board, a fresh page of the pencils and a restart is ready to go after printing it again.

I've had a few discussion with other artists and dealers who think this work process is creating some confusion among collectors.  In many cases there's a finished page of inks available from the inker and a finished page of pencils available from the penciller and some are thinking the simultaneous existence of both versions work to reduce the value of both pieces.  I get that, but I come down on the side of the inker as having the more intrinsically valuable piece since the comic book was reproduced from that work.  The pencils, in this case, are merely a by-product of the process.  In my particular case, the pencils often don't exist in a finished form.

Were someone to ask, the pencils for this piece exist as two partial drawings on 14x17" sheets of Bond paper and the contents were altered even before being printed off.  I have sold them to interested buyers previously, but they're not things I'd carry around in my portfolio to sell at conventions.  As such, the only finished artwork I ever produce is the inked drawing, meaning there are no competing versions of pencils and inks.


the digital colouring is something that's becoming more a part of the conceptual process as I work.  When inking I knew very few of the lines would remain black in the final piece, particularly the lines describing the clouds.  However, I'm now drawing elements in ink that I know will become colour elements in the finished piece.  While inking I had a memory of a flock of gulls flying in the wake of a sail boat on Lake Ontario;  the sky behind the boat and birds was full of slate grey clouds, but the sun was still shining brightly making them bright white specks.  Here I drew the birds in black, but them "painted" them white on the line art layer.  The process is becoming more like painting as much as anything else as I go. 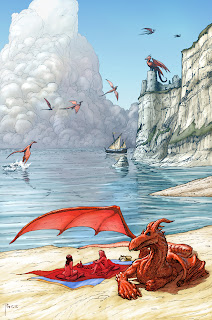 I should probably mention some of the compositional devices I use as I wrap this up.

I usually start thumb-nailing my ideas with one or another of two compositional frameworks; a grid divided into thirds (often called the rule of thirds) or a fibonacci (or golden) spiral.  I'll save a discussion of why these structure work for another time.  For this piece I started with the grid as it's easier to visualize when placing shapes at a very small size and is less reliant of the overall proportions of the picture. 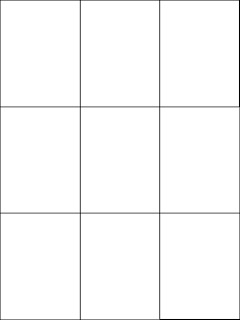 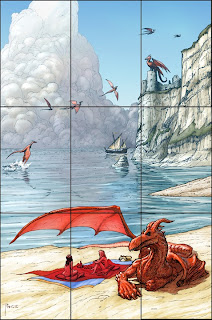 As you can see, the general placement of shapes lines up with the grid without slavishly following the lines.  This composition also follows a backwards "L" structure as well.  I used to teach a course in design and composition, so this stuff interests me more than most, I suspect.

Some of you may have digital cameras with the grid option for the viewers and I think Corel Painter has both the spiral and grid as tools in their more recent versions of the software.

This should be available as a high quality, limited edition print through The Outland Collective shortly.
Posted by Unknown at 12:17