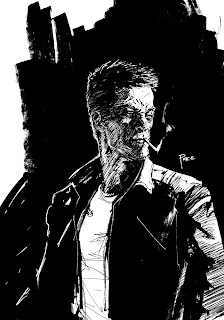 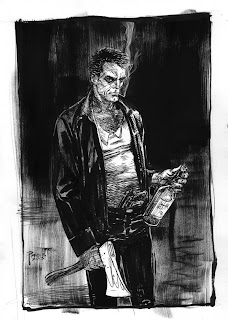 Steve Niles (of 30 Days of Night fame) is coming up to the Fanexpo this week!  Been a long-time fan of his work and I met him face-to-face at the Ottawa comicon a few months back and he's a helluva nice guy!

Above are a pair of fan art sketches of his signature character, Cal McDonald.  Of the two, I think I got closer with the second sketch.  Was tempted to pop a crowd of glowing eyes behind him. . . .

Cal appears in numerous comics and prose works, most frequently under the Criminal Macabre title.  It's pulp/horror run rough through the view of a self-destructive American PI.  It's the book Vertigo should have been publishing in the 90s instead of their fetishizing everything with a British, Scots, or Irish accent.

Right now Steve is offering a "Name Your Price" deal on his Cal McDonald novel, SAVAGE MEMBRANE.  Check it out!