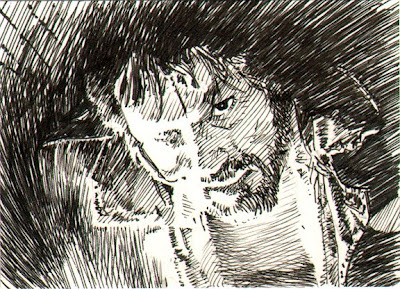 Captain Dallas has one of the best beards in SF! Tom Skerrit was one of my favorite actors after this. I wouldn't be surprised if this is one of the reasons I wanted to grow a beard even before I developed fuzz on my upper lip.
The past week using all this photo reference was fun and I loved flipping through that old Alien photonovel. I'm thinking I'll come back to this later and get around to Kane, Lambert, The Alien Pilot, the alien itself and. . . Jonesy? Well, the cat would make five.
Next Monday I'll be posting the three Invincible sketchcards from last week. I decided to take a bit of a break and take the Monday off. The rest of the week will be a series of four cards.
Posted by Unknown at 09:50