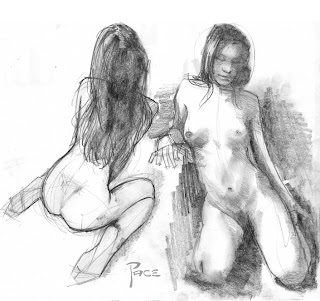 Saw someone posting about how they've lost their motivation to draw.

The best motivation to draw is because you love drawing, but, as we age, outside opinions and internal anxieties start to present themselves.  You may start worrying you don't draw as well as those people.  Thinking 'I don't know if I can make a living drawing' or 'I have to get better.'  These things can really mess any artist up, especially when your young and not getting the satisfaction from drawing you used to.

There's a reason for this and it's pretty simple;  you used to feel better about drawing when you were a child because drawing was its own reward.  As you drew more you probably got positive feedback from family and friends and that became important, reducing the importance of the inherent reward of drawing.  You became 'that kid who could draw real good'.  I was a part of your identity when you were starting to form who you thought you would be.

You went to some form of art school and you took a bit of an ego hit.   Someone, or several someones, were better than you thought you were.  It was easier to deal with because it was a small group, but still, you grew a little insecure.

Then you were done with school and, maybe, the job didn't come like you hoped, or you decided you weren't happy with your portfolio and needed to redo it but just never got around to finishing it.

Or you looked around and realised you were now competing with everyone out there and some of those people blow your mind and you want to be as good as them butyou don'tknow howandit'sjusttoogoddamnedhard. . . awwwww, fuckit!

Short of brain damage, it's not likely you'll regain that childlike glee from drawing for its own sake, you spent too many years developing and maturing so that dog don't hunt no more.

However, you're an adult and you're on the internet, so I think I can help.

I'm going to tell you and everyone who reads this the real secret now that we're too complex to be happy with whatever comes out of the end of the Crayola and our circle of friends are a little more critical than the kids you impressed in school.

Sorry, had a weird image I had to get out of my head.

To continue with the metaphor, when you're masturbating it doesn't matter if you look like Matt Damon or Rosario Dawson, so it doesn't matter if you can't draw like Frank Frazetta or Claire Wendling.  Just draw because it feels good.  If no one's paying for it, or you're not trying to make someone else happy with the results the actual results don't matter as long as you enjoyed the process and are happy when your done.  Keep a super-secret sketch-book that no one else is allowed to see and actually make the connection more explicit (see what I did there?) and make it a sex fantasy sketch book.  Heck, Robert Crumb didn't keep his fantasies secret and those sketch books bought him a house in France.

Going to push this a little further.

Like sex with a partner, drawing can be better when you get another person involved.  Hell, you can get some hot group action going quite easily -- probably easier than in real life.  Drop in on open life drawing session, join online sketch groups, form a sketch blog with weekly challenges.  Buy a sketchbook and ping-pong it with a friend, alternating who gets to draw in it from week to week.  There are lots of ways to get other people involved.

Hell, you can even draw with people of the same sex and no one will bat an eyelash!

This even applies to professional work.  You can even make the direct comparison that some work is essentially prostitution if you're only doing for the money, but the work you do for money should contain some satisfaction in both the process and completion regardless of content or client (if not, get a different client).  This can turn into a long digression, so I'll stop there.

If you think you've lost your motivation to draw and are depressed about it, do realise something different has actually occurred.  You wouldn't be sad about it if you actually lost your drive or motivation;  if you weren't actually interested in drawing it wouldn't bother you.  You programmed yourself into this mess, putting one or more bits of clogging code between wanting to draw and drawing.  Hack your brain.  Defrag it, whatever you need to call it to help you make a direct connection between drawing and your pleasure response.

At first, make it easy.  Draw things you know you're good at.  Don't make it any more difficult or demanding than just enjoying it -- I don't know of any people who set goals when they're hammering their happy buttons, so there's no need to do that here. Make it fun -- that's what it's supposed to be.

Once you're back to enjoying drawing, then think about pushing yourself a bit.  I'm certain you'll already find you're drawing better just from loving it again.

Thanks for this, Richard. As a 31 year old who has gone through everything you described in your post, I have tried to make that trek back to the child-like joy of drawing, but with no success. I start and stop, growing more frustrated as time and what I thought was my destiny passes me by. I will give this a try.

Doggone this is a great blog post. Well said sir.

Cheers for this, Richard. I'm working hard to remove a mental block I seem to have placed on myself for fear of people reactions. This helps a lot.