Dug out a few more older pieces!
After I left comics during the late 90s crash, I started doing a good deal of illustration in addition to some storyboarding and other game art. One of the games I did quite a bit of work for in a short period of time was this roleplaying game called Unknown Armies. I took every new assignment as an excuse to play with some different media or style. 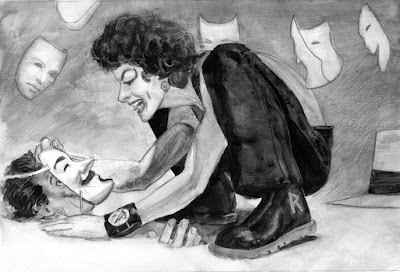 I took the assignment to draw a number of the interior illustrations (I also did the cover -- I should dig up a scan of that). The illustrations were going to be printed inn black and white, and I had very little time to do them (from other work, not any deadline pressure). Instead of the tonal pencil drawings I had done the first time I worked for these fine folks, I opted to do looser pencil sketches and work with quick and loose watercolour to get the values in. I pulled out highlights with gesso and drew back inn with pencil as needed. 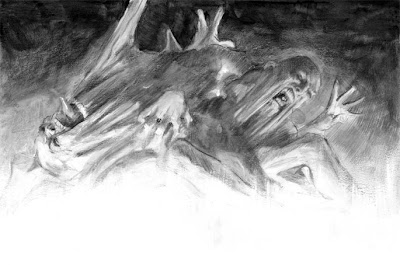 Weirdo that I am, I chose to use a burnt umber-y colour instead of lamp black, which would be the practical colour to choose. So the pieces look like this: 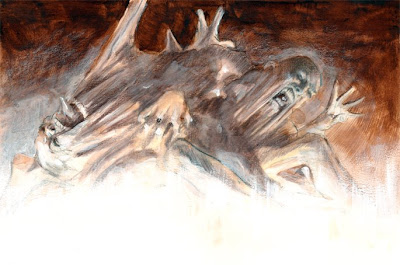 I received some nice attention for the cover and some interesting notoriety for another interior illustration; I drew the monster created by the karmic/spiritual/ectoplasmic residue left by a rape. I was told a number of stored refused to carry the book because of the illustration.

I'll keep looking for the illustration -- failing that, it (and the ones above) are in the book Postmodern Magick.
Posted by Unknown at 22:37