Manged to finally make it to another Dr. Sketchy's Anti-Art School in Toronto last night. 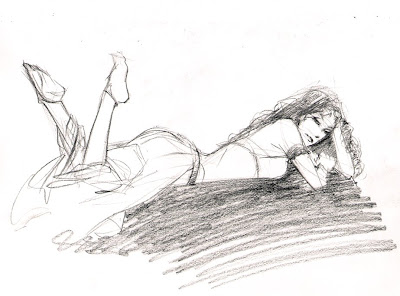 The model was all sorts of awesome. Her name's Laura Selenzi and she's got a website! Feel free to check it out and see how poorly I failed at getting near how gorgeous and sensual she is. 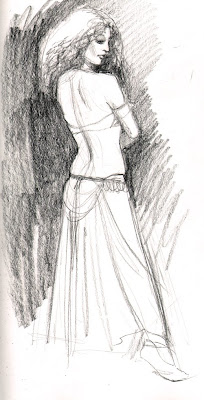 Her costuming was excellent - -would love an opportunity to actually do a much longer study or painting of her to attempt to capture how ornate and beautiful the clothes are. 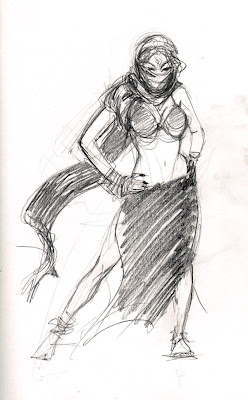 There were the usual drink contests -- I drew the above one when we were suposed to partner up for some sort of Batman-themed version of her. I was sitting next to people not too interested in goofing, so I just gave her comic book boobs and didn't enter. 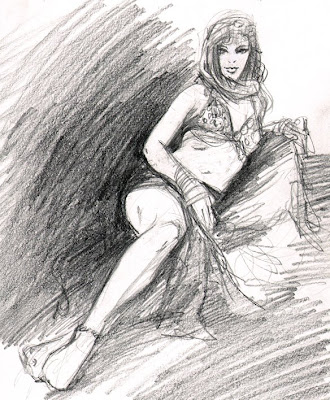 I arrived around 10 minutes late and ended up sitting wayyyy at the back, but a few people bailed around halfway through and I got front row seating for the rest of the night! 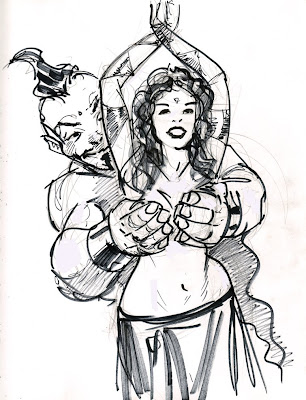 This contest was the first of the night -- draw Laura with/as/or something with a genie. I went for Genie Jackson!
Hah!
. . .
Well, it was the best I could come up with --I took too long to polish it off and ended up not even entering. One of my former students ended up winning the goldshlager (sp?) cocktail.

Next one's on the 29th -- hoping to make that one too! I got a Dr Sketchy's link to the right for anyone interested in checking it out.

Found your site Richard, love the drawings of me, and thanks for the compliments! Mind if I put the pics up on my site at some point? :)

I'd be flattered if you put these sketches up on your site.

I hope to see you at another Dr. Sketchy's this year!
~R