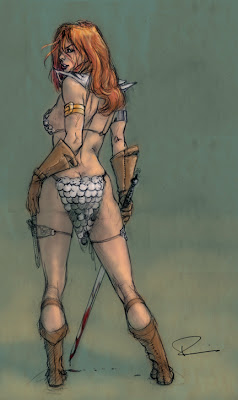 My knee seems to not want to get better any time soon, so I sit and work. I'm seeing another doctor about it Monday, but I'm hoping it'll be better by then.
I took a short break from my current assignment to do something for the blog: a Red Sonja.
I was just going to put up the rough pencils, but felt that it needed a little colour -- at least some red hair! I like the initial drawing, so I'll probably do something more finished with it when I have both the time and inclination.
I wasn't initially a fan of the character. She seemed silly next to Conan, and I wasn't surprised to discover that she wasn't really a Howard creation, but a bastardization of a Howard Character by Roy Thomas and co.. I DO like hot redheads, and that scale-mail bikini has its allure, so, while not a fan, I certainly enjoyed her appearance.

I was prepared to dislike Dynamite's new Red Sonja series and I ignored it for some time, until I had a number of pals recommend the collections. . .

So now I AM a fan of Red Sonja. I think Rubi's doing the best work of his career and the writing is top notch.
Heck, I even registered at Dynamite Entertainment's Forum over a month ago to say so, but I'm still awaiting a moderator to approve my membership there. Maybe someday. . .
Hmm, that last part seemed a little negative. I blame my knee!

Richard, I've been trolling the Yahoo REH group, and admiring your sketches and other work for a couple of months, now.

I LOVE this picture of Sonja. You're an inspiration.