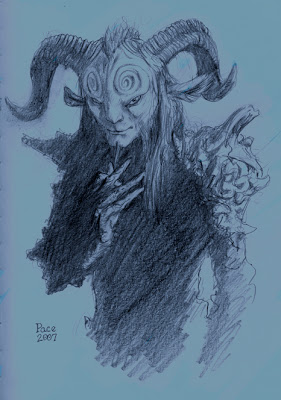 Saw del Toro's latest film Monday night and it was even better than I was expecting -- even after having read so much critical praise. It's one of those films that just stays with you, haunts you.

Over the last few days I've found myself thinking about aspects of the film beyond the usual technical deconstruction of the story or direction I have been doing with films for the last decade or so. It's one of those films were the technical brilliance disappears into the story, I'll have to see it again to just get a better sense of how it was put together.

Mike Mignola's design is obvious in a few places, the titular faun in particular.

I'm already keeping a spot for it on my DVD shelf open.

I am in love with this picture. Outstanding job.

I really love Mignola's designs, so the faun was a blast to draw.