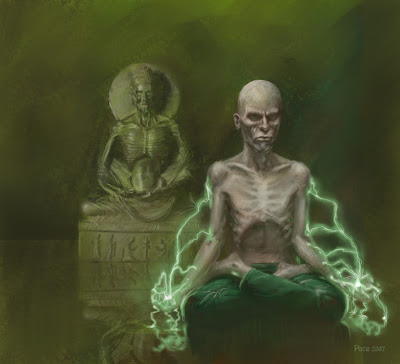 Another pulp character remodel suggested by Warren Ellis at his The Engine. The Green Lama was an American who gained mystic powers after spending ten years in Tibet. He also drinks a potion of radioactive salts to give him lightning powers. I thought a cancer-ridden, 110 year old mystic would be the logical result of that.
Didn't have time to do anything with this until today (I think he started this one on Monday), but I was sick as a dog today and started playing with this instead of doing more serious work. This is still essentially a sketch since there's piles of errors and sloppy work, so I think it's fair game for the sketch-blog. That's the Emaciated Bhudda in the background - -thought it was an appropriate element for my take on this character.
Still sick, so I'm off to bed!
Posted by Unknown at 00:58