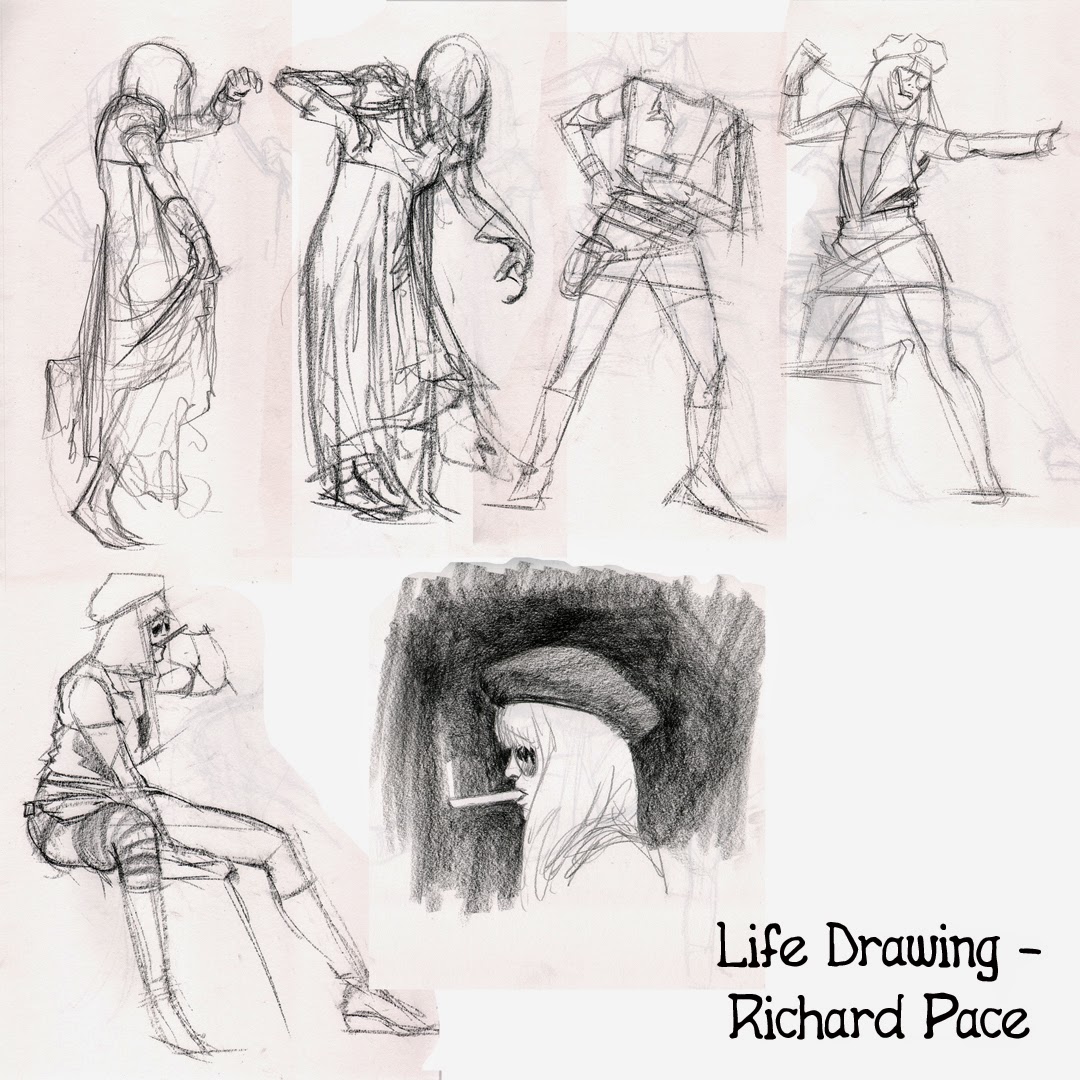 Scanned some life drawings from a while back and jammed them together in one image. 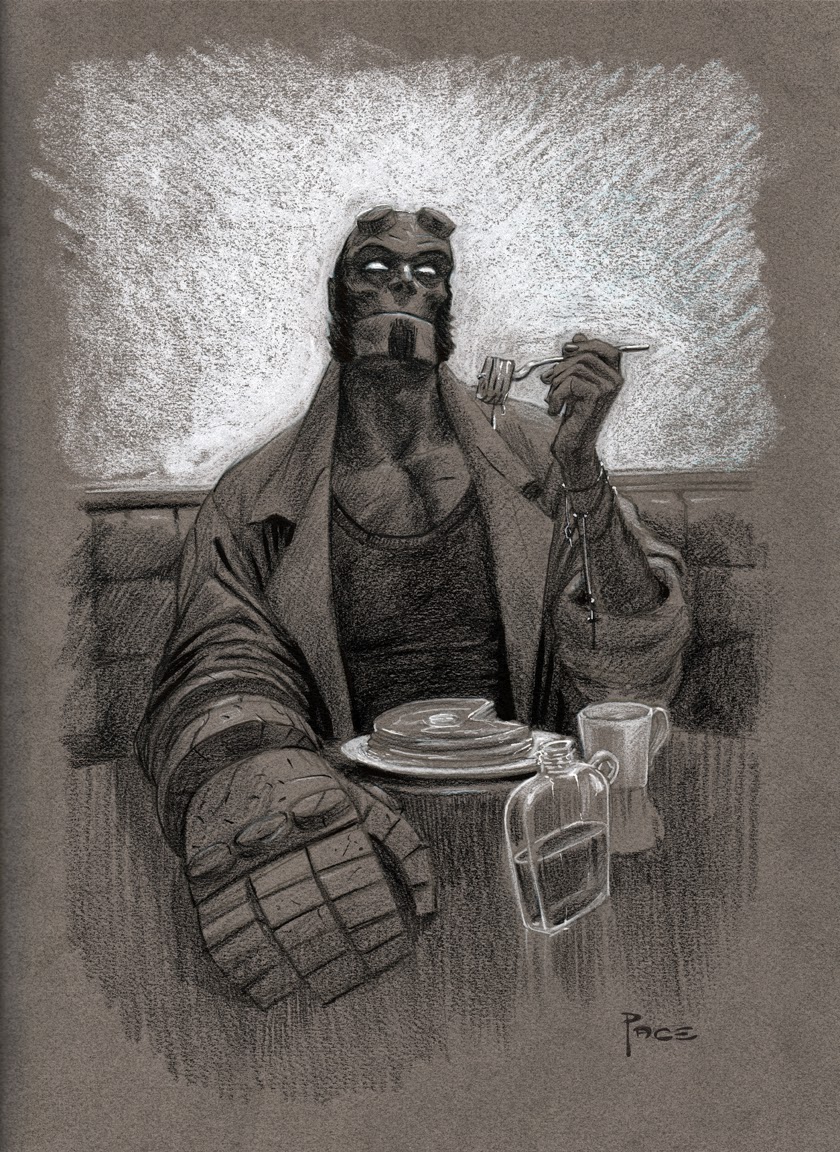 People love their Hellboy and Hellboy loves his pamcakes!

~R
Posted by Unknown at 02:00 No comments: Links to this post

Email ThisBlogThis!Share to TwitterShare to FacebookShare to Pinterest
Labels: Hellboy

Was at the local art supply store (Curry's) earlier and discovered they carried Uni-Ball Signo white gel pens.  I've ordered them previously from Jetpens after hearing how great they were and was not disappointed in the least, so I had to grab a couple.  The text and design is slightly different on the ones I grabbed locally -- no Japanese characters, the body on the Japanese model is all clear, the English one is frosted white.

I decided to test them to see if they were any differences other than the language.  As I started to set up the test, I realised I could share the results, so I added the Sharpie Poster-Paint white marker into the mix.  I also use Pilikan Graphic White with a brush in the studio as well as the Pentel Correction Pen, but both are so different in use or application than these tools that I left them out.

I set up a variety of inks, leaving out both India and acrylic inks, which are also studio tools -- I generally use these sort of pens at cons, so thought it best to try them on the inks I'd also be using in that situation.

Overall, I'd say it looks like the Japanese and English pens are identical.  The Signo pens have a slight edge on the Sharpie as it seems to absorb into the Copic and G-Tec slightly more.  All three do well on water-based  and waterproof inks.

Hope this useful!
Posted by Unknown at 16:19 No comments: Links to this post 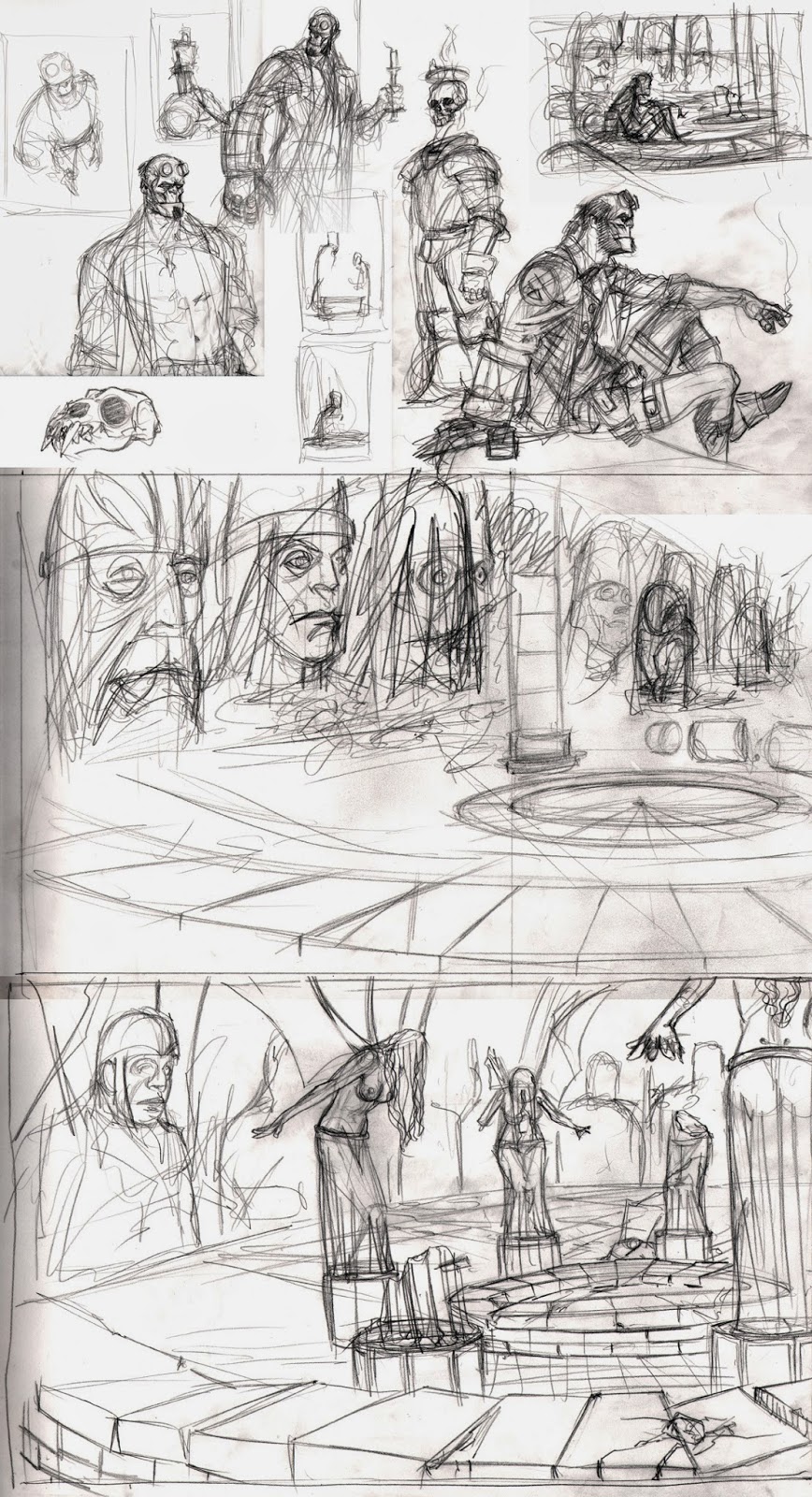 Some people really like the occasional look at the process.  I was tidying the studio and crumpling the piles of layout bond that accumulate and realised there was stuff worth scanning and sharing.  Some of the material was already too crumpled to scan well, but the remainder.

I generally start everything with a pile of sketches of the main characters get to get the look into my hands.  Then I usually do 10-20 thumbnail sketches of layout ideas -- often with a thick pencil or marker to keep details from slowing me down.  I reduce the thumbs to two or three 'good' ideas, then do three or more pencil sketches developing those and then run with my favourite.  I then do sketches of the 'parts' of the image - -foreground, background and figures can often all be on their own pieces of paper.  Sometimes they're drawn at a comfortable size instead of a similar size to how they'll fit on the image -- tiny figures might be drawn 200% larger to better capture form and gesture. for example.  The lot gets scanned, manipulated, cleaned up and assembled in Photoshop.  The result isn't what I would have considered finished pencils a few years ago, I save about 25% of the finishing in the drawing for the inks so i'm not just tediously tracing over my pencils.  I convert the image to 22% Cyan and print it out on the art board.  The rest is ink and white paint.
Posted by Unknown at 15:38 No comments: Links to this post