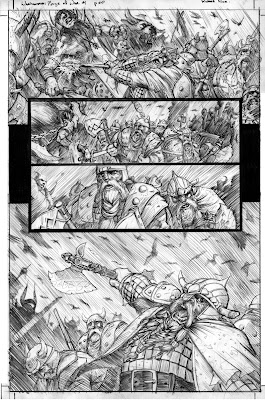 Did the above as a sample for Boom Studio's upcoming Warhammer comics series. I decided not to do any more on this for various situational reasons, but thought it'd be nice to share it. This was pencilled for reproduction, so it's way, way darker than I'd draw for an inker. This isn't even actually finished, since this would be a licensed project and revisions could be expected I didn't do some of the finishing elements like rain falling in the foreground and splashing off the armour. For that I would have gotten busy with my electric eraser much in the same way I would have used white paint over a traditionally inked comics page.
~R
Posted by Unknown at 04:19