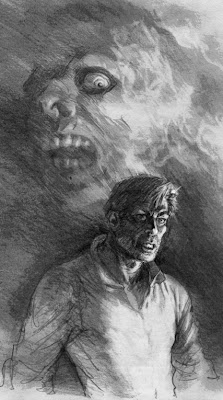 Howard's Kathulos tales are ones that held up better in memory than in rereading as I grew older. Of course, I was never a big fan of the Fu Manchu tales Howard was riffing when he turned his hand to Kathulos, so that makes a certain amount of sense. I always come back to them ever five years or so, so there must be something there.

Skull-Face, the first of the tales collected in the Berkley edition of the same name, is the closest to being a favourite. This Costigan (since there were a few characters Howard named Costigan), starts off in a haze of hashish and has a nightmarish vision of the emaciated and ancient villain in this drug addled state. It gets worse for him from there.