Moving and Shaking with Vampirella 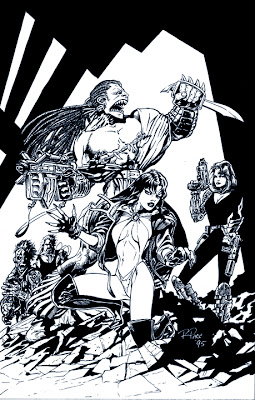 The latest comics industry news that has me smiling from ear-to-ear is that Fangoria Comics has outright bought Vampirella from Harris Comics. The best coverage is at Heidi MacDonald's Blog, The Beat : http://pwbeat.publishersweekly.com/blog/2007/01/11/yet-more-on-vampi/

My favourite part is from a previous entry, though, where Jonathan Rheingold ends up looking stupid. It's a wee bit of Schadenfreude, but a long, long time ago, I had a project killed for no other reason than JR didn't want to bother with anything started before he took over things at Harris Comics. I know a few other people treated poorly by the man, but it's really up to them to discuss that.

I had written all four issues and was drawing a special preview thingie when it got killed. I've had higher-profile and better paying gigs killed over my career, but none for the reason that the project was considered an inconvenience.

Anyway, I had recently found this in my files while tidying my studio: it was the first piece of promo art for the Time Bleeds mini series. I had only started trying to ink (it shows) and the drawing was pretty much the all I was capable of way back then.

Maybe I'll do a new Vampi for my next entry here.

Email ThisBlogThis!Share to TwitterShare to FacebookShare to Pinterest
Labels: Vampirella