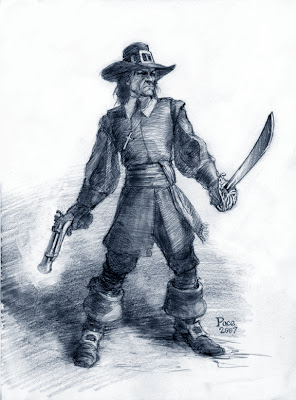 I've been a fanatic for Robert E. Howard's characters ever since I read the Berkley edition of Red Nails way back when.

My perrenial favourite is Conan -- at his best when he's essentially an amoral freebooter or rogue rampaging through the edges of what passed for civilization in Howard's Hyborean age -- but Solomon Kane and Kull have their own unique appeal.

Kane, the grim Puritan, stalking the evils of the African continent in the name of God and avenging murdered pagans, how could I not love the character!

I understand there's a movie in the works and I think Dark Horse is brewing a Solomon Kane comic for later in the year, so it looks like a good time to be a fan of Howard and the character.
Posted by Unknown at 16:13

Very nice work Richard.
Not that your taking requests or anything, but I would love to see an El Borak Sketch. nobody ever does El Borak.