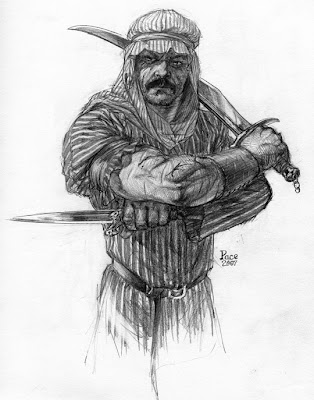 This is the first Howard character I experienced after reading his Conan yarns. I grabbed the Berkley edition THE LOST VALLEY OF ISKANDER with eager hands, wondering only in the briefest passing why the cover artist put a moustache on Conan!
I was at first disappointed to find that Francis Xavier Gordon (aka El Borak) was historical fiction (and not Conan with a 'stache), but was soon thrilled to discover that it was WEIRD historical fiction. The same level of horror and fantasy imbued the world this version of Lawrence of Arabia's world as Conan or Kull's. In many ways, Gordon is the modern equivalent of Conan, as he lacks the broodiness of the rest of the Howard characters. If I recall correctly, L. Sprague de Camp plundered at least one Gordon story in his succesful attempt to squat a portion of REH's creativity.

As much as would like to drawn any of Howard's characters in comics form, Gordon immediately follows Conan on the wish list. My ego would probably put him at the top, since fewer great artists have turned their hands to this lesser-known adventurer.
~Richard
Posted by Unknown at 18:54