New daily exercise for in your sketchbooks! I hope you're all comfortable with your squares, circles, & Golden Spirals and that you might feel your developing some more line control.

This week I want you guys to start with another 8" square towards the top of the page of your sketchbook: 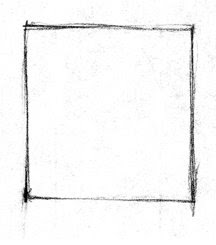 Nothing new there!
You start drawing another 1" square, but this one is appended to the bottom of the previous one. Again, you're going to try to be as accurate as you can while drawing everything freehand.

You keep adding 1" squares until you have a total of 8 of them. After I drew mine, I measured and was off by over an 8th of an inch. That was better than I expected as there does tend to be a certain amount of sway and wobble in the lines as they get longer. Do use all your visual clues to help you though; the edge of the paper is straight and the top should be reasonably perpendicular.

Next you'll divide the top square into fifths. Don't worry about measuring this as long as you feel you have 5 reasonably equal sections you're good to go. I dropped marks down the whole of the 8 squares. Again, use the previously drawn marks as guides as you go even though you may have some sway in the sides of the squares, the general idea is to get a nice set of marks to follow for the next step

Draw lines down both interior sides of your stacked squares. Just draw along the "first" fifth and the last. You should end up with something that looks like this:

Finally, draw 8 ovals into the newly defined inner rectangles. Think of them as stretched circles and have them touch all four sides and swoop nicely through the corners.

Apart from a new wrinkle on developing your spacial recognition and further developing your line control, the 8 squares develops toward another bit of knowledge and a later series of exercises. Many artists draw their figures' proportions based on a measurement in heads. Just to clarify; an artist wanting to draw a standing human figure from their imagination, could divide the space the figure was to occupy into 8 equal sections and then use that measurement to draw a proportionate figure. Of course, the head would occupy a full 1/8th section of that space. 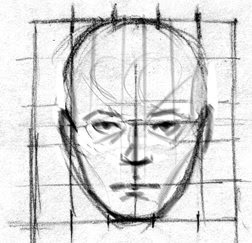 While I'll get to proportions later, it's understood that the an average figure is 7 1/2 heads tall, many artists prefer figures that stand 8 heads tall, as they tend to look more impressive. In fashion drawing and a few other venues, 9 heads is not uncommon. My approach to comics kinda runs along those lines as well; the average adult running around the street would be 7 1/2 heads tall, the bulk of the super-heroes or villains they'd meet would be 8 heads, and the really iconic ones -- like Superman or Captain America -- would be 9 heads. I also play with height when doing this; regular folks are 5'8"-5'10", heroes 6'-6'2", Supes or Cap types would be 6'4"-6'6". Of course, character specifics play into that, since Wolverine is 5'3" and Kingpin is 6'7" I'd be using radically different head measurements for these characters.

Next exercise leaves boxes behind for a bit.
~R
Posted by Unknown at 12:18

Okay, so how many heads would Wolverine be? And what would be a recommended head height for my own character, who is 19-years-old, 1.68 meters/5' 6" (i.e., short), but is also a superhero? Much obliged in advance for you answer!

That depends on how realistically and to what proportion you draw your other characters.

I'd likely draw Wolverine around 7 1/2-heads tall, but the rest of his physical frame would make him imposing -- I'll be drawing a Wolverine piece for the Shuster Awards Charity show soon, so hopefully that might show you what I mean.

Heroic proportions are possible for even short characters -- but so are more mundane-looking types. You could draw your 5'6" character 8-heads tall and just have him smaller in proportion next to taller characters and just live with his head being smaller.

Hope that answers your questions.