Been a busy week. My birthday took a much larger chunk out of my schedule than I anticipated, so I'm still playing catch-up. 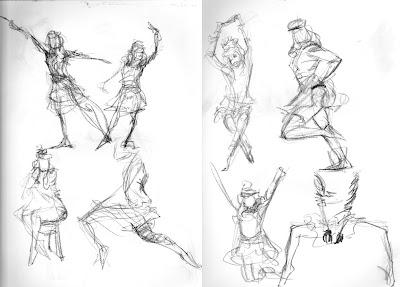 There was a scheduling cock-up that meant we started later even though more and more people are showing up earlier to get better seats. This was on the Cameron House side of things, so it's unlikely to happen again. 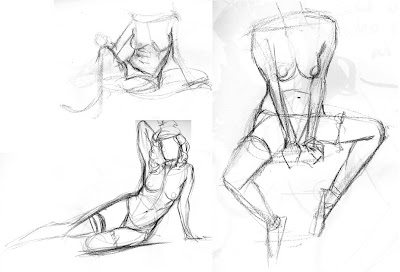 I still got to sit with the bestest of people and draw. Though, as usual, I end up laughing too much to really get too serious about it -- which is a part of why the "anti-art school" is a part of the name. 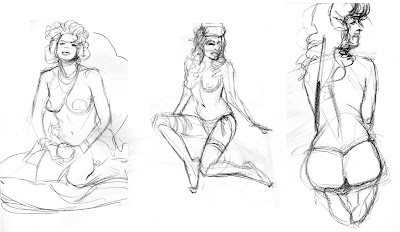 The challenges were all for drinks: I won the first one with a bad sketch with a naughty word balloon and a great deal of support from former students.
Life is good!
*
The next drawing exercise is already done, but I'm going to hold on to it for Saturday and try to build a buffer in to the schedule and try to be one step ahead from here on in.
*
I had my first official class at Durham College this week; it was a pretty relaxed session as I reviewed their work so far and discussed what they want to put in their portfolios and demo reels. Just 13 more weeks until it's over!
*
Zuda had TWO rank updates since my first post on the January entries. I'm actually stunned at the initial and subsequent placings; I really am surprised Love the Dango or Legacy of the Wanderer aren't in the top three!
*
Most of the stuff I'm drawing right now can't be shared, and I am pretty overwhelmed at the moment, so posting might be thin apart from the drawing exercises for the rest of the month.
Later,
~Richard
Posted by Unknown at 16:39

I just found your blogger through another website. I've really enjoyed looking through it. Your posts about sketching everyday and how important it is really struck a chord with me.

My sketchbook is my safe-zone. I've been posting works from it onto the internet for a while now (Conceptart.org) - but only the stuff I favor. Everything else is just progress. No one has to know about all the drawings that "don't look good" - they are not bad, it's just myself learning, and keeping up with the practice.

As a student (gearing towards transferring to art school in the Fall) I want to improve. I don't much care about style because I don't have any lol. The problem is I get a bit reclusive in the art of making. Friends want me to go out but I'd rather stay in, or I'm guilted into it.
What is the golden path? Live a fun, crazy life (I like crazy) or draw, paint, and create, as much as it takes.

Sorry this became more about me than your blog, but I thought I'd ask you because of what I read.

Hi Matt,
You can learn as much, if not more about your work from feedback on lesser works so don't be too shy of sharing them.

Part of the joy of doing something you enjoy for your career is that the practice isn't too much a burden. You have to allow that passion to exist within its own parameters, though. Those parameters have to coexist with your goals. You can't reasonably expect to get great with a laissez-faire approach to study.

I don't see how crazy can't go side by side with constant creation. After you did the rock-climbing and had sex with with the pierced and tattooed twins, take out your sketchbook and draw them in their post-coital bliss. As long as crazy doesn't dive off into self destruction, you're good to go.