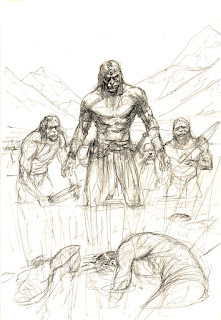 It was a little slow at the start of the Toronto Comicon this morning and I didn't bring any work to do while waiting for the sketches I would eventually do, so I started sketching based on a panel in the upcoming 3-part adaptation of   The Men of the Shadows starting in issue #5 of Robert E. Howard's SAVAGE SWORD from Dark Horse Comics.

I might end up turning this into something more finished after I wrap up the first portion of the adaptation. . . .

I managed to take a pictures of a couple of the sketches I did this weekend -- I'll share them later!

Had a blast at the convention and am pleasantly exhausted.