Whatever Happened to Those 99 Red Skulls?

Some of you might recall I was working on doing 99 Red Skell sketch cards for the Captain America set, but I've never posted any of them.  The reason is I didn't manage to finish them by the deadline and didn't realise I missed the deadline until after it had passed.

I did learn never to try and do 99 full colour sketch cards for practically nothing and meet deadlines for real work.  I was using every shortcut I could think of -- rendering them in batches, actually redrawing another card I liked -- but it wasn't enough.  I'm not sure how the other people manage to find the time to do that many cards on top of their other assignments (and many of them do far more than the head shots I typically do), but I was finding the cards were starting to suffer.  I never even managed to find the time to open the box of Kree/Skrull cards before that deadline passed.  There's no way I can reasonably accommodate more than colour 25-50 cards over a few months with my schedule as it is. If nothing else, I learned my limits here.

Anyway, I figure I can share what I did manage to do over the next little while even though they'll never reach the collector market.

Here's a batch of the penciled cards.  I'd lighten these with a kneaded eraser before using the markers on them. They'd all be taped into a group of eight cards, I'd draw the Skulls then tape the edges down to an 11x14" sheet of illustration board so I could move them around without handling the cards themselves.  I used a fair amount of liquid frisket to block out the heads before using a marker-airbrush to tone the backgrounds.  Lots of Copic work and pencils crayon noodling later I'd call it quits. 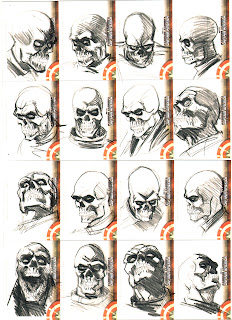 Here's a batch of more-or-less finished cards - -actually only happy with a few of these.  The lower card on the left side was one of the first I did -- the quality drop is pretty obvious after that, I think. 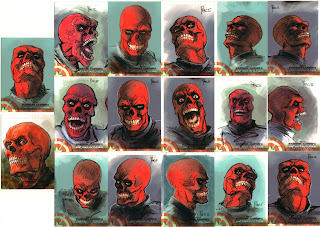