Gene Colan has passed away.

Even though every report or reminiscence about the man described him as kind, giving and wonderful man,  I'll leave it to others who actually knew the person to talk about him.  I only know him through his work, which was a revelation when I first encountered it in the pages of the two Nathaniel Dusk series published by DC back in the 1980s.  I had seen his work prior to that, and I was impressed with what I saw of his work translated through the hands of his inkers, but it wasn't until I saw his pencils that I really experienced the power and energy  in his drawings.

Now, nearly thirty years later, it's easy to Google samples of the man's pencils and I have a certain envy to the starting artists getting to see so much so easily, but, my so-called deadly sin aside, I encourage all to take the time to surf the net for as much of Gene's work you can.  Perhaps order some collections of his work.

I certain nothing would make him happier than knowing he's still entertaining and enthralling comics audiences even after passing away.

***
A while ago a bit of an artist meme started with all sorts of talented folks taking their hand to inking a specific sketch of Dracula Gene did.  I was initially planning to participate, but found I was actually too intimidated by the task.  The news pushed me past that this morning.
So, even though I still feel inadequate to the pencils, here's my inks over the legendary Gene Colan's pencils.  Once the Canada Post lockout has been resolved I'll likely auction this off to benefit The Hero Initiative. 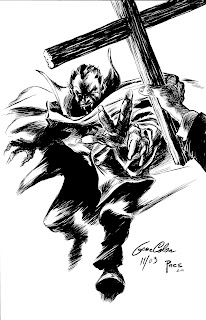 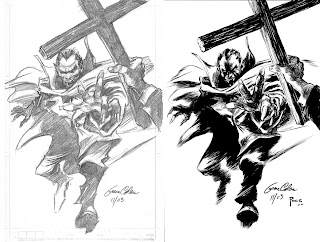 And, for anyone interested in taking a hand at this themselves, a large scan of the pencils. 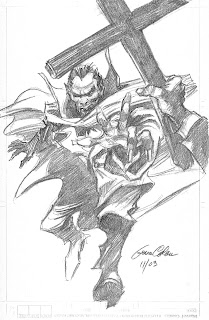