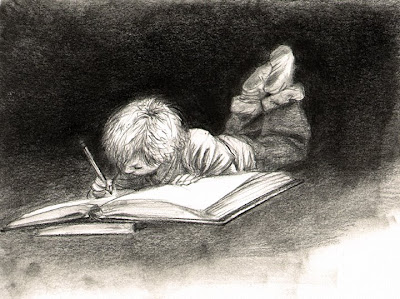 I believe in drawing every day.
That gets easier when you do it for a living, perhaps too easy, so let me rephrase that slightly:
I believe in drawing for myself every day.
To a great number of people that might seem like a pointless distinction, so I should explain it. When you draw for a living the drawing is a means to an end. The goal is to give the client what they need to the best of your ability within the time allotted. This often will mean you’ll be working well within your established parameters of ability and knowledge and you won’t be expanding your capabilities as an artist. You will get better at doing what you already know how to do, and that will certainly seem like growth for some time. Dave Sim described the path for the comics artist as learning to draw well then learning to draw quickly then, finally, learning to draw well quickly. There’s a great deal of truth in this and I know I certainly experienced it. However, the trap for the working artist is that often the gratification of meeting the deadline and getting paid replaces the euphoria of drawing better than you did last month or last year.

Grab a pile of comics by a regularly working artist from across the length of his or her career. At the early issues you’ll see struggles with both storytelling and drawing, which will eventually settle down into competence and confidence. Many stagnate there. Some leave comics for growth opportunities in related fields; storyboarding, concept art, illustration and other tasks. Others might continue to push, their drawing and/or storytelling gets better, more visually compelling. The latter is the more difficult path as you have to push through both your expectations of your work and of the medium while doing so. As an art student you really only had the one goal; get good enough to get hired. As a professional it seems that most work to the level where they want to get good enough to not be out of work. They stop developing. I can think of a number of journeyman artists who’ve been essentially drawing at the same plateau for years, month after month of the same flaws or using the same shortcuts to cover up the same flaws.

There’s no external need to eliminate the flaws as long as they’re not stopping you from working, is there? If working for someone else was always the goal, that’s perfectly fine. However, I’d argue that no one chose to draw for a living to just get good enough. I think that every successful artist and art student I’ve met chose art as a career because they loved to draw at some point. For many, unfortunately, that love turns to obligation and becomes a job like most others, but with the benefit of it being indoor work with no heavy lifting. Oh, and you can work all day in your pajamas if you like. Perks galore!

There is a way to keep from losing that loving feeling; start drawing for you.

One of the things that just flabbergasted me when I started teaching life drawing was the instructions and expectations for students’ sketchbooks: students were to draw a minimum of 20 minutes a day but all the drawing within was to be strictly limited to life drawing derived exercises or studies from life. I really cannot stress enough how bad a decision that was.

All the students I was teaching were hoping for careers where imaginative drawing is the core skill. The ability to draw well without a model or to draw things that no longer or never existed is the backbone of animation, comics, and concept art. Not allowing the students’ imaginations to have play within their own sketchbooks is a certain method to turn love into resentment. I made a point of allowing imaginative drawing in the books and often provided more feedback on those works than the Nicolaides or Hale exercises. I realized that it was more likely I’d see improvement from the exercises if I could show a direct connection between the traditional studies and how they approach their own drawing. The students really responded well to this. I know I’m bragging, but my life drawing classes killed more trees with their sketchbook production than the other first year classes and I really feel they just drew better overall by the end of the year.

The school was started by someone who never worked in any of the fields taught within its walls. Having myself worked with animators, comic book artists and concept artists I know the grimly serious approach to art in the school was woefully inappropriate to actual work environments. You can work hard and learn while having a good time.

If you’re still a student you have to remember that all the drawing you do is for you.

Which brings me back to sketchbooks; the easiest way to maintain the idea of drawing for yourself is to have something entirely about drawing for yourself that you can carry with you and use whenever you a few spare minutes. It can be a developmental tool, an idea journal, a therapist, a notepad, whatever you want it to be at the moment it can be that. The key point is that you have to be able to take it with you. If you plan to draw for yourself an hour a day, it’s a great deal easier to do it in 5-10 minute increments over the course of the day than to try and find the time to do it all in one go. Buy a book that’s easy to carry and make sure you always have a couple of pencils and pens with you. I usually travel with a book bag, so an 8.5 x 11” black hardcover book is easy to always have with me. I also have a few really small books – I just posted about the wee Moleskine I’ve started carrying – it fits nicely in my breast pocket with a pen and pencil. If I’m out and I realize I have nothing to draw with or on I feel strange. I don’t feel naked, that’d be creepy, just like I forgot my keys or left a kettle on – that sort of thing.

Over the next while I’ll be handing out some developmental exercises for those interested in trying them. The idea will be to do them every day for 15 minutes in addition to drawing whatever you want to draw however you’d like to draw for up to an hour total per day. We’re trying to develop a sketchbook addiction, here, so 25 minutes a day is better than an hour every two days.

Hey, I want to become an illustrator/concept artist someday. I can draw things pretty well if I have a model or reference.But I have trouble coming up with poses and anatomy from the imagination. I plan on attending a fine arts program (Max the mutt OR Ocad). But is it possible to "learn" to draw people and things from the imagination? Or is it one of those things you need to naturally need to do?

I posted this comment but it doesn't seem to be showing up, so I will repost it. I can draw anything if I have a reference or a model. But coming up with it using my imagination, especially people and poses is very hard for me. I plan on going to art school (Either Max the mutt or Ocad) and was wondering if it can be "learned"? Is using your imagination in that way something you need to have naturally?

Drawing the figure (and other things) is a key skill for concept and comics artists and it's very possible to learn how to do it.

Much of it involves learning a mannikin that you can construct from memory and memorizing a number of structural and superficial anatomical elements to bring to your drawings. I'm planning on getting to the mannikin in my blog eventually and I'm expecting it to cover several entries to explain/demonstrate it well.

Based on the recent student work I'm seeing, it really looks like Sheridan Illustration in Oakville has the stronger drawing program right now, though things could change quite dramatically with the addition of the right sort of teachers and courses at the other schools you mention.

I have a question about MTM and I was wondering if there was an email I could use to contact you about it? My email is QuangJLe@Gmail in case you want to send it there.